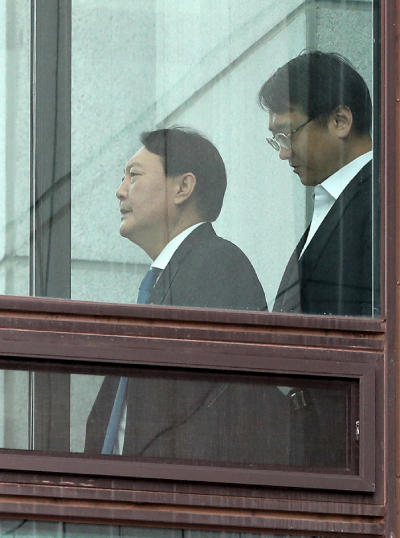 President Moon Jae-in on Friday criticized the investigation into Justice Minister Cho Kuk and demanded in a statement that prosecutors restrain themselves.

Moon’s statement was released Friday afternoon, shortly after opposition parties decided to start a campaign to impeach the justice minister for an alleged attempt to interfere in a prosecution search-and-seizure raid of his own home on Monday.

Presidential spokeswoman Ko Min-jung announced the statement, and some networks carried it live. Moon, who returned from a five-day visit to the United States on Thursday, took the rest of Friday afternoon off after issuing the statement.

“The prosecution is conducting probes into suspicions surrounding minister Cho,” Moon was quoted as saying by Ko. “Judicial processes, including the prosecution’s probes, will determine the truth and if Cho is accountable for anything.”

Moon said the public’s desire for reforms of the prosecution - a campaign promise of his own, which Cho is supposed to be implementing - has actually grown since prosecutors concentrated their firepower on the Cho investigations. He did not back up that assertion with any proof, such as opinion polls.

“The prosecution, in particular, is an institution that directly exercises public authority against the people,” Moon said. “It is, therefore, important for the prosecution to exercise its powers sternly and fairly while using restraint to respect human rights.”

Moon closed his statement with a warning to the prosecution that it must not ignore the general public’s strong desire that investigative powers be taken away from the prosecution to guarantee integrity of probes.

The statement was Moon’s first explicit warning to the prosecution and Prosecutor General Yoon Seok-yeol, whom he appointed to the post in July.

The ruling Democratic Party (DP), which strongly backed Yoon at the time, has criticized him since the investigations into Cho and his family began. Moon, however, remained tight-lipped.

Conspicuously missing in Moon’s statement was any mention of the latest controversy - that Cho and Kang Gi-jung, a senior presidential secretary for political affairs, made alleged attempts to influence prosecutors.

At a National Assembly hearing, Cho admitted Thursday that he spoke via phone to a prosecutor who came to his house on a raid on Monday. Prosecutors raided Cho’s home with no prior warning, the first such raid of a justice minister’s residence in history.

Rep. Joo Kwang-deok of the Liberty Korea Party (LKP) asked Cho if he had spoken to the prosecutor, who was leading the investigation team, on the phone shortly after the raid began. Cho admitted he did.

“My wife was in shock and she called me,” Cho said. “I made a request [to the prosecutor] to raid the house calmly and show some respect because she was in a bad state,” Cho said.

Cho’s remarks quickly prompted complaints that he tried to influence the prosecution. The opposition LKP and Bareunmirae Party said they will submit an impeachment motion to remove Cho for his misconduct.

“Having a phone conversation with the prosecutor alone amounts to abuse of power, because you are the minister who has the right to make appointments, command, control and supervise the prosecution,” Rep. Joo told Cho during the hearing.

Cho said he disagreed with the argument. “As head of a family, I can at least make such a request,” he said, insisting that he did not act as a minister when talking to the prosecutor.

The LKP and the Bareunmirae Party said they will start a campaign to impeach Cho. Introducing a motion to impeach a minister to a voting session requires votes from one third of the incumbent lawmakers and its passage requires a majority vote. After an impeachment motion of a minister is approved, his or her duties are suspended. The Constitutional Court makes a final ruling on an impeachment to remove a minister.

As of now, the LKP has 110 lawmakers and the Bareunmirae Party 28, enough to submit a motion, but shy of the 149 votes to pass it. They need other opposition lawmakers’ support to remove Cho. A senior Blue House official said Friday the Blue House had no comment on the opposition’s move to impeach Cho.

Following the controversy, a civic group asked the prosecution Friday to investigate Cho for suspected abuse of power and obstruction of justice.

The Blue House also faced criticism on Thursday for trying to influence the probe. “Through various ways, I told the prosecution to investigate the case quietly because the Korea-U.S. presidential summit was ongoing,” Senior Political Affairs Secretary Kang said Thursday in a public lecture. “The prosecution, however, didn’t obey and they conducted [the raid of Cho’s home] when the president was having a summit, crucial to the Korean Peninsula’s destiny.”

Asked how he had contacted the prosecution, Kang said, “You have to make your own guess.”

After his remarks stirred controversy, Kang said he never contacted the prosecution directly. He said he was referring to messages he posted on social media.

A senior presidential aide said Friday that Moon made no comment about Kang’s remarks.

“What Kang said through his social media accounts are his personal opinion, not the Blue House’s official message,” the official said. “We don’t make a judgment on them.”