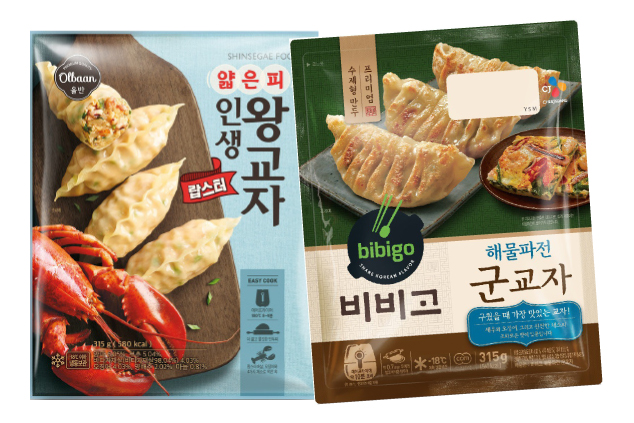 The rivalry in the Korean frozen dumpling market has moved in a whole new direction - dough thinness.

Instead of trying to diversify flavors, major Korean food manufacturers like CJ Cheiljedang and Pulmuone are now competing to see who can come up with the thinnest dough - known as wrappers in dumpling-making circles - in a bid to beat out their rivals with the best texture.

CJ Cheiljedang on Friday added new dumplings under its Bibigo brand. The company’s goal with the latest lineup is to expand its presence overseas. The new dumplings are wrapped in a 0.65-millimeter (0.03-inch) flour wrapper. Although it is significantly thinner than the usual 1.5-millimeter wrapper used in most other dumplings, CJ says its new dumplings are sturdy enough not to fall apart and will have a crispy texture.

Shinsegae Food on Sept. 24 also joined the trend with a new dumpling with a 0.7-millimeter thickness while Haitai Confectionery & Foods and Dongwon F&B launched dumplings with a similar thickness last month.

The competition to bring out dumplings with thin flour wrappers is said to have been started by Pulmuone in April, when it unveiled a new dumpling and promoted it as being wrapped in super thin flour.

Pulmuone said the thin flour cover not only raises the texture of the product but can also improve the visual appeal since consumers can see that the dumplings are well stuffed. They are also said to be popular among health-conscious consumers who want to minimize flour consumption.

Pulmuone said it has sold 7.5 million packets as of August. The performance boosted Pumluone’s market share in the frozen dumpling market in Korea, moving up from fourth to second place as of July.

“Considering the fact that demand for dumplings is low in the summer, 7.5 million is a lot higher than what we had expected,” said a spokesperson for Pulmuone, suggesting the possibility that its sales could surpass 10 million within this year.

Despite the ongoing trend, CJ says thin flour wrappers are not that important in determining the taste of dumplings.

“There isn’t anything good or bad about having thin flour wrappers for dumplings,” said a spokesperson for CJ. “The most important part of dumplings is maximizing the chewy texture.”

The spokesperson explained that the company in 2013 released a Bibigo dumpling product with a 0.8-millimeter flour wrapper.