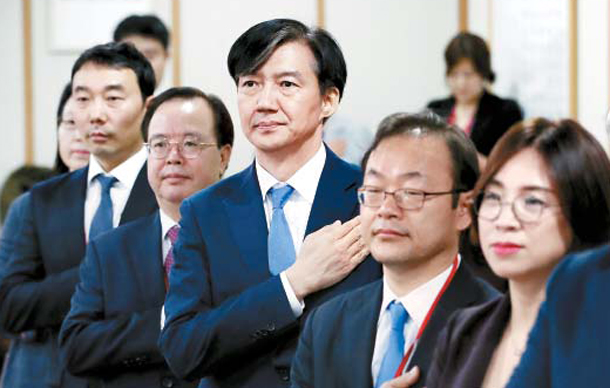 Justice Minister Cho Kuk, third from right, attends a kickoff meeting of a judicial and prosecutorial reform committee at the Ministry of Justice office in Gwacheon, Gyeonggi, on Monday. [NEWS1]

Moon gave the order during a meeting with Justice Minister Cho Kuk to discuss reform plans for the prosecution earlier in the morning, Ko said. It was the latest in a series of warnings issued by the president toward the prosecution, which has been conducting an unprecedented investigation into the justice minister and his family. Many in the Blue House and the ruling party see it as the prosecutors’ resistance against the administration’s campaign to weaken their powers.

“All public authorities must act humbly before the people,” Moon said. “Powerful agencies, in particular, need stronger democratic controls. The prosecution is a government organ and a component of the administration. Therefore, the prosecution, as well as the Ministry of Justice and the president, will humbly accept the people’s demands for reform of the prosecution and look back on the shortcomings.”

Moon said the prosecution’s investigative powers have been largely freed from political influences since he took office, but the prosecutors’ ways of exercising their prosecutorial powers and conducting investigations and their organizational culture still need further improvement.

Moon said he is supportive of Cho’s plan to overhaul the prosecution. Cho wants to strengthen the criminal and litigation departments of the prosecution - a de facto measure to weaken the prosecution’s elite special investigation unit which handles high-profile cases such as the ongoing probe into his family.

Cho also briefed Moon about a plan to strengthen internal regulation of the prosecution to bar its members from informing the media about details of an ongoing criminal investigation, such as an alleged crime committed by a suspect before a formal indictment.

“But if we finalize those reform measures and enforce them now, a misunderstanding could be triggered that they are intended to put a damper on the prosecution’s ongoing probes [into Cho],” Moon said. “Therefore, the ministry must start preparations to collect more opinions from members of the prosecution and the civil society and modify the reform plan, so that it will be finalized and implemented as soon as the investigations into Cho [and his family] are completed.”

Moon said the Justice Ministry and the prosecution are both the subjects of reform and they must work together. “The ministry must play a central role to reform the legal systems, while the prosecution must lead the efforts to reform the ways of exercising prosecutorial powers and running investigations and its culture,” he said.

According to Ko, Cho also asked that Moon fill vacancies in the top posts of the Supreme Public Prosecutors’ Office, including the head of the internal audit department, and the president accepted it.

According to a senior presidential official, it was the first time that Cho had a face-to-face meeting with Moon since his appointment ceremony in August.

Moon’s latest message was seen as an ultimatum to the prosecution, because he singled out the prosecutor general as the recipient of the instructions. It was extraordinary for the president to give orders to Yoon in a meeting that did not include him and make the directive public.

Moon was also reminding the prosecutors that he has the command and control over them, including the right to replace the prosecutor general, saying that the prosecution is also a part of the administration.

His earlier message, issued on Friday, was less aggressive, only demanding the prosecution to think about why the public is still demanding reform amid its probes into Cho. A massive rally took place outside the Supreme Prosecutors’ Office (SPO) in southern Seoul on Saturday to support Cho and denounce the probes, and the president’s language became more forceful on Monday.

It remains to be seen how Yoon and the prosecution will react to Moon’s latest message. Yoon issued a statement on Sunday that he has always been committed to reform of the prosecution. He said he will do his best to respect the people’s will and the National Assembly’s decision, stressing that “I have repeatedly made public this position since the confirmation hearing, and it remains unchanged.”

Sources inside the prosecution told the JoongAng Ilbo that Yoon was making it clear that the ongoing probes into Cho are not to resist the reform measures.

They also said Yoon was indirectly challenging Moon’s demand for reform, because he has never opposed the plan. The sources said that was why Yoon stressed that he has repeatedly supported the reform, unlike his predecessor Moon Moo-il.

During his confirmation hearing, Yoon said he will respect the National Assembly’s decision on the government’s plan to redistribute investigative powers between the prosecution and the police, a program fiercely protested by his predecessor. Yoon also said he supports a plan to establish a new investigative agency for senior public servants.

Justice Minister Cho said Monday that he will push forward with the reform of the prosecution, as the ministry launched a judicial and prosecutorial reform committee.

“Countless people attended a candlelight rally to demand the reform of the prosecution, and they are asking again to whom this country belongs,” Cho said at the launch ceremony of the committee. “I am not sure until when and how far I can go, but I will do my best to reform the prosecution.”

The committee will push forward reform measures that do not require the National Assembly’s approval. “Downsizing the special investigation unit and changing the organizational culture of the prosecution will be speedily pushed forward,” a senior Justice Ministry official told the JoongAng Ilbo on Monday.

The 16-member committee, headed by a lawyer, Kim Nam-joon, includes incumbent prosecutors and investigators as well as professors and lawyers.

Kim is a former deputy head of a liberal advocacy group Lawyers for a Democratic Society and a member of Moon’s presidential campaign.

Yoon and the prosecution did not issue an official response on Monday to Moon’s latest directive. Earlier in the morning, Yoon met with newly promoted investigators of the Supreme Prosecutors’ Office and asked them to “calmly do your jobs especially in a time like this.”

Some in the prosecution complained about the conspicuous timing of the administration’s push to slim down the special investigation units.

Last year, then-Prosecutor General Moon Moo-il had shut down special investigation units in some regional prosecutors’ offices and reduced the high-profile cases handled by the units.

The administration, however, praised special investigations into the members of the previous Park Geun-hye and Lee Myung-bak administrations under the campaign of “eradicating accumulated evils.” Cho was the senior presidential secretary for civil affairs at the time.

“The minister is arguing that special investigation units must be reduced or shut down only after he experienced a probe himself,” a prosecutor of the Incheon District Prosecutors’ Office, Jang Jin-yeong, wrote in a statement posted on the intranet of the prosecution.