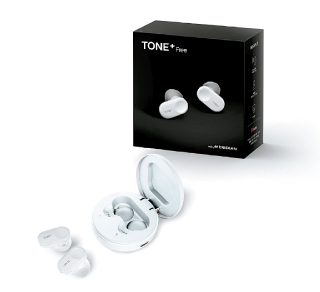 LG Electronics will release its first wireless earbuds in Korea this month, the company announced Tuesday.

The LG Tone+ Free earbuds will come in two colors - black and white. The official release date is set for Oct. 28 in Korea. The black model will go on sale first while the white model is set for a later release in November.

The earbuds come with a case that not only charges them, but also uses ultraviolet light to kill germs.

Five minutes of charging allows the earbuds to run for about an hour, while a full hour-long charge will give about six hours of battery life, LG says.

To ensure voice quality for phone calls, the company inserted both a voice microphone and a noise-cancelling microphone so that the earbuds can pick up clearer audio.

The two microphones are located in different positions in order to pick up the user’s voice without background noise.

Unlike some of its key rivals, LG Tone+ is waterproof. Both earbuds come with touch pads that can be used for basic commands like playing and stopping music.

It can also understand voice commands like calling a specific person or reading out the user’s schedule for the day.

LG is a latecomer to the wireless earbud market. Apple originally released its AirPods in 2016 and Samsung followed suit in February with the Galaxy Buds.

Contrary to several cynical responses after the AirPod’s initial release, the market for wireless earbuds has been constantly increasing to reach 27 million units in the year’s second quarter, according to market research firm Counterpoint Research. Apple is the leader with a 53 percent market share, while Samsung’s Galaxy Buds came second with 8 percent.

It remains to be seen whether LG can penetrate the market. The LG Tone+ in the color black were made available for presale on Tuesday on e-commerce website 11st for 259,000 won ($216), which is higher than Apple’s and Samsung’s versions. Presales will end on Oct. 14.