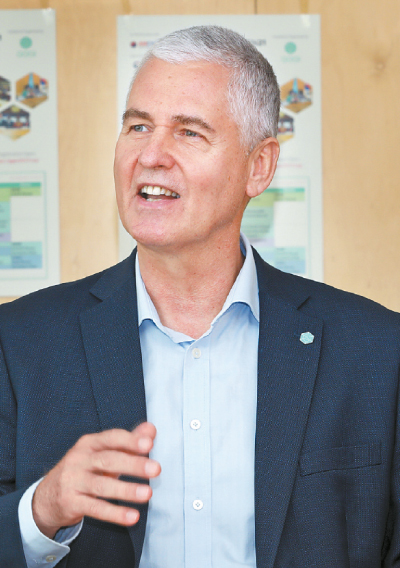 Frank Rijsberman, director-general of the Seoul-based Global Green Growth Institute (GGGI), welcomed President Moon Jae-in’s recent announcement that Korea will host a summit on green growth next year, saying Tuesday that the event will be a “major milestone” to inspire governments and private sectors across the world to take action against climate change.

The second P4G summit, set to be held next June in Seoul, will serve as a “moment of truth” to see whether countries can achieve Sustainable Development Goals and their nationally determined contributions to the Paris Agreement, Rijsberman noted in a press conference at the GGGI’s headquarters in Jung District, central Seoul.

P4G, or Partnering for Green Growth and the Global Goals 2030, is an international initiative supported by countries, businesses, international organizations, academia and the civil society to find solutions for green economic growth. Korea is among 12 country partners, the rest of which include Denmark, Indonesia, Kenya and Mexico.

The upcoming Global Green Growth Week 2019, hosted and organized by the GGGI from Oct. 21 to Oct. 25, is expected to accelerate that “green transition” as well, Rijsberman highlighted, by gathering stakeholders from the public and private sectors to scale up their transitions toward renewables.

“There is a climate crisis,” Rijsberman said. “I think we see growing political will [from governments] to address this, yet not from all of them and not fast enough. And there are a lot of opportunities for this green transition that businesses can invest in.”

Kim Hyo-eun, deputy director-general of the GGGI and head of the institute’s green growth planning and implementation division, said some 600 to 700 people from 40 different countries are expected to descend on the InterContinental Seoul COEX hotel in Gangnam District, southern Seoul, later this month for the Global Green Growth Week.

Some sessions will also be available for members of the ordinary public to join as long as they register on the GGGI’s website in advance, Kim said.

Susanne Pedersen, assistant director-general for investment and policy solutions at GGGI, said the institute was planning to launch its Green Growth Index during the week-long event, a measurement that covers 115 countries and builds on 36 indicators for four elements of green growth: efficient and sustainable resource use, natural capital protection, green economic opportunities and social inclusion.

Asked about Korea’s score, Pedersen replied the country isn’t in the top rankings like some other European countries but that it was in a “moderate” ranking that requires some work to be done, like tackling air quality and using more renewable energy.