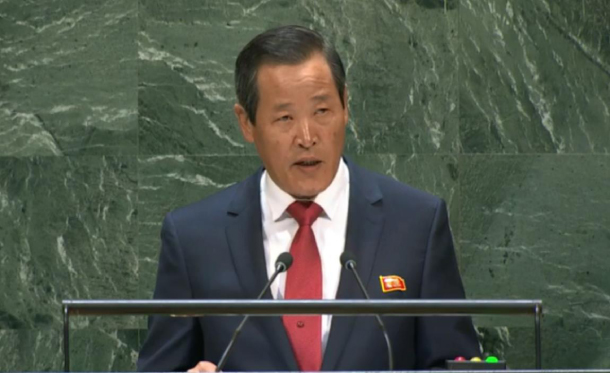 The two sides agreed to have “preliminary contact” on Friday and hold working-level negotiations on Saturday, Choe said in a statement reported in the North’s official Korean Central News Agency (KCNA). She did not elaborate on an exact location.

North Korean Ambassador to the United Nations Kim Song said Monday in New York that it is up to Washington to make a decision to bring a new approach to denuclearization negotiations and make it become a “window of opportunity” rather than an impetus for “crisis.”

Kim, speaking at the 74th session of the UN General Assembly, noted that North Korean leader Kim Jong-un in a key policy speech in April “stated the position that there was a need for the United States to put aside its current method of calculation and approach us with a new one, and we’d await with patience for a courageous decision of the U.S.”

He continued, “Assuming that the U.S. has had enough time to find out a calculation method that can be shared with us, we expressed our willingness to sit with the United States for a comprehensive discussion of the issues we have deliberated so far,” likely referring to Washington’s denuclearization demands and Pyongyang’s calls for easing of sanctions and security guarantees.

“It depends on the United States whether the DPRK-U.S. negotiations will become a window of opportunity, or an occasion that will hasten the crisis,” added Kim.

However, Ambassador Kim noted that since the historic first North-U.S. summit in Singapore on June 12 last year, relations between North Korea and the United States “have made little progress so far and the situation of the Korean Peninsula has not come out of the vicious cycle of increased tension.”

He blamed Washington for “resorting to the anachronistic hostile policy” against Pyongyang through military and political provocations, echoing past bellicose rhetoric against the United States.

Ahead of the General Assembly session, there had been speculation that the UN could be a venue for high-level talks between U.S. Secretary of State Mike Pompeo and his North Korean counterpart Foreign Minister Ri Yong-ho.

Kim also blamed the lack of progress in inter-Korean dialogue as being a result of “the double-dealing behavior of the South Korean authorities.”

He was especially critical of the joint military exercises between Seoul and Washington and an “introduction of the latest offensive weapons” which he said “constituted flagrant violations and challenges to the agreement in [the] military field on completely halting hostile acts against one side and refraining from building up armed forces for implementation of the Panmunjom Declaration” signed during the inter-Korean summit on April 27, 2018.

Kim noted, “The key to consolidating peace and stability and achieving development on the Korean Peninsula is in the full implementation of the DPRK-U.S. joint statement,” signed by the two countries’ leaders in their first summit in Singapore on June 12, 2018.