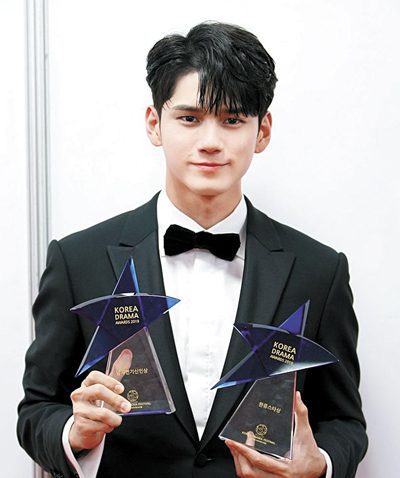 Ong Seong-wu was crowned “Best New Actor” and “Hallyu Star” at the 2019 Korea Drama Awards for his role in the recently-wrapped JTBC teen drama “At Eighteen.”

“It’s embarrassing for me to attend this event as an actor, so I’m very nervous to receive such an award,” the star said when he came to the stage to pick up the “Best New Actor” award during the ceremony on Wednesday.

“Although I still lack a lot to receive any kind of assessment, I will take this award as a sign that many people will continue watching me. I will work even harder from now.”

Ong debuted as a singer in 2017 as a member of Wanna One, the boy group formed by the finalists on the second season of the audition program “Produce 101.”

After the group disbanded earlier this year, Ong began pursuing an acting career. “At Eighteen” is his small screen debut.