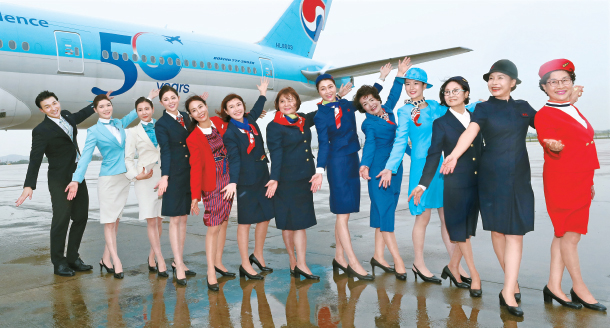 Korean Air is celebrating its 50th birthday by looking back on half a century of cabin crew uniforms.

The airline kicked off the celebration on Wednesday on flight KE683 from Incheon International Airport to Ho Chi Minh City, Vietnam. Cabin crew on the flight were dressed in historic airline uniforms, and the in-flight televisions showed the Korean news from 1969, the year the airline was founded.

Korean Air was founded on March 1, 1969, and its first flight was to Ho Chi Minh City. It was the airline’s first international route on Oct. 2, 1969.

Domestically, some flights from Gimpo, Busan and Jeju Island will also see cabin crew decked out in former uniform styles.

A total of 45 members of cabin crew in three teams are taking part in the event over the next month.

Korean Air’s first uniform paired a scarlet-colored skirt with a shirt without a collar. The design reflected the miniskirt trend that hit Korea in the 1970s, introduced by singer Yoon Bok-hee, known for songs like “Everyone” and “It’s You Folks.”

The airline in 1972 adopted a new uniform to celebrate its first crossing of the Pacific Ocean.

Korean Air introduced another change to adopt a red-colored uniform in the 1980s to tie in with the 10th Asian Games in Seoul, held in 1986, and the Seoul 1988 Summer Olympics.

The airline changed the color to navy at the beginning of the ’90s, keeping the color for the next 14 years.

In 2005, Korean Air adopted a uniform that was designed by renowned Italian fashion designer Gianfranco Ferre, who used to work as a stylistic director of Christian Dior in Paris in the late ’80s and ’90s. The uniform, which Korean Air has kept ever since, is beige and celadon green.

In total, Korean Air has had 11 different uniforms over the past 50 years.

As part of the airline’s ongoing celebratory event, Korean Air will also hand out bouquets to travelers arriving at some international airports.