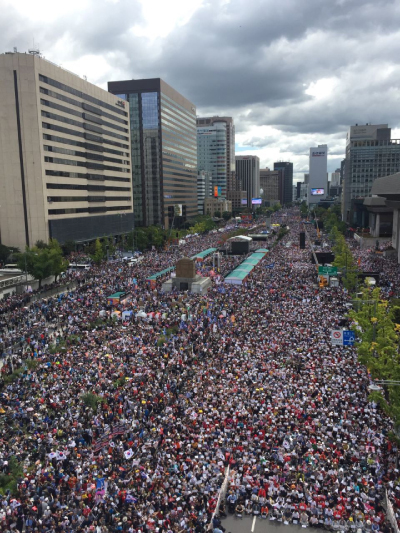 Prosecutors summoned Chung Kyung-sim, wife of controversial Justice Minister Cho Kuk, on Thursday to question her on a cascade of allegations about her family.

Chung, 57, an English professor at Dongyang University in Yeongju, North Gyeongsang, appeared at the Seoul Central District Prosecutors’ Office in Seocho District, southern Seoul, on Thursday at around 9 a.m. to answer questions about suspicious investments she and her family made and on allegations that she fabricated an award for her daughter to help her get into medical school.

The questioning ended at around 5 p.m. Chung was summoned as a suspect, not a witness.

It was the first time Seoul prosecutors summoned Chung, a little over a month after they first carried out a massive raid into companies, schools and local government offices linked to the Cho scandal on Aug. 27.

Since then, prosecutors summoned Cho’s son, daughter, brother-in-law, first cousin once removed, younger brother and the younger brother’s ex-wife, zeroing in on a justice minister who has denied any fault on his part.

Chung entered the Seoul Central District Prosecutors’ Office on Thursday morning through an underground route that was off limits to media, despite an earlier announcement from prosecutors that reporters would be allowed to film Chung as she arrived at the building and entered through a gate on the first floor.

Seoul prosecutors said they changed their mind because of Chung’s bad health and the fact that she’s “not a public figure.”

Prosecutors said they were also afraid Chung may encounter an “unfortunate accident” by the mob of journalists awaiting her.

Some legal experts believe prosecutors caved in to pressure from the Blue House and government.

One key allegation prosecutors were expected to ask Chung was whether she fabricated an award for her daughter and submitted it as part of the daughter’s application to Pusan National University’s medical school, where she currently attends. On Sept. 6, prosecutors indicted Chung for that allegation just moments after her husband’s confirmation hearing at the National Assembly drew to a close.

Chung was criminally charged with fabricating documents and obstructing business at Dongyang University, where she works as a professor, by creating a Dongyang University presidential award for her daughter - without the Dongyang president’s own knowledge - and secretly placing his seal on the award.

Dongyang University President Choi Sung-hae told media he was pressured by Chung and Justice Minister Cho to lie on their behalf about bestowing the award, but chose not to.

Prosecutors are trying to figure out whether Chung gave money to Cho’s first cousin once removed to establish PE on her behalf and purchased 500 million won ($415,000) worth of PE stock using her brother’s name, which would be a violation of the Public Service Ethics Act and the Financial Investment Services and Capital Markets Act.

As Chung was being questioned, a massive rally calling for the resignation of Justice Minister Cho was held at Gwanghwamun Square, central Seoul. Exactly how many people gathered was unknown, but the main opposition Liberty Korea Party claimed there were more than 3 million people.