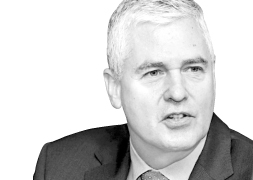 Frank Rijsberman
The author is director-general of the Global Green Growth Institute.

There she was, Greta Thunberg, speaking truth to power — not too impressed by the United Nations Secretary General sitting next to her, or all the world leaders sitting right in front of her in the great hall of the UN General Assembly, but really angry. How dare you ask me what to do, a child that should be in school. Act now or we, the children, will not forget that you failed and betrayed us, she said.

Hers were the most powerful words I heard at the UN Climate Action Summit 2019. Not words of courteous diplomacy that are the common currency in such meetings, despite what the speakers might really think, but raw emotion and fear for the future of our world. Thunberg has managed to mobilize her own generation to stand up and demand “Climate Action Now,” shaming adults, parents and world leaders.
Will it work? Will it prod leaders to take real action against climate change?

Though nothing new was said by world leaders of the major economies or the large countries in the world, I saw many hopeful signs in meetings all over New York City. At the UN, some 70 countries now committed to the new norm — a net-zero carbon target by 2050. Also, at the UN, some 87 major private companies committed to align their actions to the 1.5-degree scenario, which also requires full decarbonization by 2050. And all across New York City during Climate Week in events organized by NGOs, philanthropies and private companies, new commitments were made, new alliances and coalitions were formed and examples were given that action can be taken.

I was most impressed by Denmark’s leadership. In many events, Danish Prime Minister Mette Frederiksen demonstrated the leadership Thunberg was calling for. Denmark has committed to achieve net-zero emissions by 2050, but the new government followed that by setting its 2030 target to reduce emissions by 70 percent, marking the most ambitious national target in the world. So, is this realistic, and can it be done in Denmark? The Danish target should be perceived as former U.S. President John F. Kennedy’s call to go to the Moon. The key is to set a clear goal and then chart the actions needed to achieve that. Relying on demonstrating our ingenuity and innovation seems impossible today but can become possible tomorrow. I couldn’t agree more!

In an effort to help reduce the country’s carbon dioxide emissions by 70 percent, Danish pension funds have pledged to invest $51.7 billion in green assets by 2030. Torben Möger Pedersen, CEO of PensionDanmark, said that the green deal will make Denmark an “absolute world leader” in its transition to a green economy. Danish business leaders were ready to back up their government, convinced that taking such strong climate action now is not only necessary to save the planet — but it is a must for businesses to get ahead of the curve on climate change to survive. That is green growth in action! It is crucial to demonstrate that it is possible to take action now, decarbonize the economy and maintain a high standard of living in an inclusive economy that leaves no one behind. The key solutions are as follows: renewable energy that is commercially attractive to invest in; electric cars, buses and two-wheelers to end the combustion engine; energy efficiency gains in buildings and district heating and cooling, as well as appliances; circular economy approaches to deal with waste streams; and nature-based solutions to protect and rehabilitate landscapes as well as sequester carbon.

Decarbonization will have to go hand-in-hand with increasing the resilience of our society to adapt to the changes in climate that are already with us and are unavoidable. In New York City, the Global Commission on Adaptation, chaired by Ban Ki-moon, the 8th Secretary General of the UN and the Global Green Growth Institute’s president and chair, presented its report and plan for action. While the costs of adaptation are estimated to top $7 trillion, the report also outlines solutions.

It was encouraging to hear an increasing number of countries commit to doubling their contribution to the Green Climate Fund, from Germany, Norway and Britain to Sweden. The need to invest in climate action is in the trillions of dollars, and that can only come from the private sector, asset managers and institutional investors. Seeing pension funds like PensionDanmark step up and bring their colleagues to the table is one of the first signs that this is now indeed happening.

Decisive climate action is a critical part of achieving the Sustainable Development Goals, and both can only be achieved through strong partnerships between and among governments, businesses and civil society. True partnerships are not easy. One excellent example is the still-young P4G — Partnering for Green Growth and the Global Goals 2030, an initiative taken by Denmark and launched through a first heads of state summit in October 2018 in Copenhagen. In New York City, President Moon Jae-in announced that Korea will host the second P4G summit in Seoul in June 2020. That should become another key milestone on the way to Glasgow, Scotland, where countries can share their progress in the green transition and their commitment to climate action.

Summing up, while the leaders of major world economies have not yet delivered the climate action Thunberg demands — earning U.S. President Trump her death stare — there were many positive signs pointing to accelerating action and admirable leadership in New York City. We have another 14 months left until the climate change conference in Glasgow next year to live up to the expectations of Thunberg and her generation. How dare we fail them!