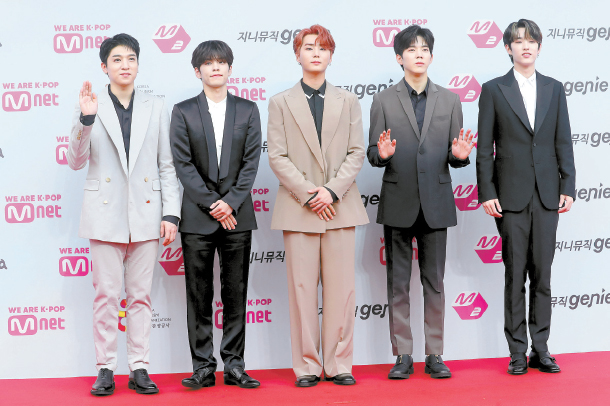 October is shaping up to be a music-filled month, as three bands announced upcoming releases on Monday: rock band DAY6, boy band Winner and ballad duo Fly to the Sky.

DAY6, a five-member rock band from JYP Entertainment, will be releasing their latest album “The Book of Us: Entropy” on Oct. 22, three months after their fifth EP “The Book of Us: Gravity.”

The band recently finished the U.S. leg of their world tour, through which they performed in seven cities, including New York, Chicago and Los Angeles. They will be continuing their journey to Australia, Asia and Europe and ultimately put on 31 shows in 26 cities.

Four-member boy band Winner announced the release of a new album titled “Cross” on Monday, which comes five months after their last EP “We.”

The date of the release has not been set yet, but the band will be meeting with fans on Oct. 26 and 27 for concerts at the KSPO Dome in southern Seoul. The quartet will then embark on their Asia tour, starting with Taipei in Taiwan on Nov. 24, followed by Jakarta in Indonesia, Bangkok, Kuala Lumpur in Malaysia, Manila and Singapore.

Finally, ballad duo Fly to the Sky will be celebrating their 20th anniversary this month with their 10th full-length album titled “Fly High,” their agency H2 Media said on Monday.

“Fly High” comes five years and five months after their last album “Continuum,” since which the members - Brian and Hwanhee - had been actively pursuing their own careers in singing and acting.

“They will be making a big comeback as a duo, and the album will allow fans to reflect on the past 20 years of experience,” the agency said.

The duo will then go on a joint national tour with hip-hop group MFBTY, with whom they collaborated for the upcoming album. Tickets for the concert will go on sale on Interpark on Oct. 15 at noon.