A view of Banpo Xi apartment in Banpo-dong in Gangnam, southern Seoul. [YONHAP]

In June this year, a married couple in their 40s purchased a 194.5 square-meter (2,094 square-foot) Banpo Xi apartment in Banpo-dong in Gangnam, southern Seoul, for 3.6 billion won ($3 million).

The government is now looking into the purchase because both the cash holdings and loans were unusually large.

A 30 year-old couple is also being investigated over their 4.4 billion won purchase in June of a 140.1 square-meter apartment in Banpo Jugong 1 Danji in Gangnam.

The couple paid for the apartment with 1.62 billion won of savings and 50 million won from the deposit on their former rented apartment. The remaining 2.77 billion won came from loans.

Starting on Friday, 32 government institutions including the Ministry of Land, Infrastructure and Transport, the Seoul Metropolitan Government, the Ministry of the Interior and Safety, the National Tax Service, the Financial Services Commission, the Financial Supervisory Service and the Korea Appraisal Board, will start cracking down on suspect real estate purchases.

The initiative is the biggest joint investigation into the real estate market as the government believes that the recent increase in real estate transactions in Seoul is due to illegal purchasing practices.

According to the Land Ministry, between April and May, roughly 300 real estate transactions are suspected of having been illegal, which accounts to roughly 7 percent of the transactions made during this period. 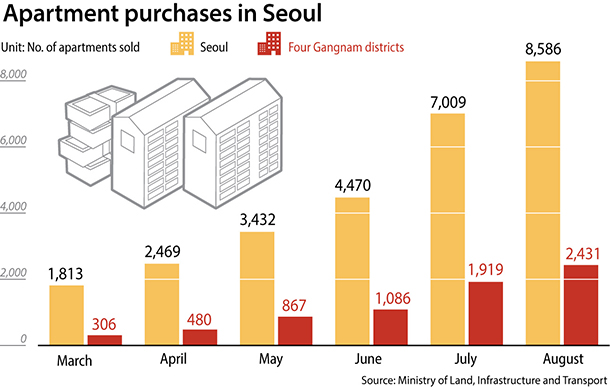 That number more than doubled to 700 between June and August, accounting for roughly 9 percent of real estate transactions.

The government is looking into illegal loan borrowing and illegal sales. In the past, government investigations were more focused on tax avoidance including illegal inheritance or lowering the price of apartment to reduce capital gain tax.

“We believe that there is some real estate speculation using illegal loans,” said Nam Young-woo, the Land Ministry’s director on land policy.

The government will be looking into all 25 districts in Seoul with a special focus on eight districts including the four districts in the wider Gangnam area - Gangnam, Seocho, Songpa and Gangdong - as well as Mapo, Yongsan and Seongdong along the northern side of the Han River and Seodaemun in central Seoul.

The investigation will particularly target real estate purchases reported since the start of August. This means sales made since June, as it can take up to 60 days for real estate transactions to be reported to the government.

The government will be looking into cases where the loans that were borrowed to purchase apartments were exceptionally large, transactions that involved huge sums of cash and those suspected of using loans borrowed from family members.

Once the suspicions are verified, the real estate owners will be fined.

Korea’s real estate market, particularly in Seoul, had seen prices shooting up until recently, when a government crackdown on speculation slowed things down.

“Since the government announced additional actions including investigating the way people have created the funds necessary to purchase apartments on Nov. 1, inquires [from potential] buyers have simmered down,” said a realtor in Seocho District.

Another real estate agent questioned the effectiveness of the government crackdown.

“Some of the customers who were planning on buying an apartment by taking out loans have become uncertain whether they should buy now or later, but rich people with huge amounts of cash are hardly affected,” the realtor said.

“As high-end apartments are exchanged through consulting firms that specialize in the field, there won’t be many illegal cases [that the government will find],” said Shim Kyo-un, a Konkuk University professor on real estate. “The effectiveness of the investigation is questionable. The policies aimed at tightening regulations on funding [and loans] seem to be targeted at the general election next year.”

Professor Shim said the government will not be able to stop buyers purchasing profitable real estate in Seoul due to the fundamental problem of low interest rates and the limited supply of housing.