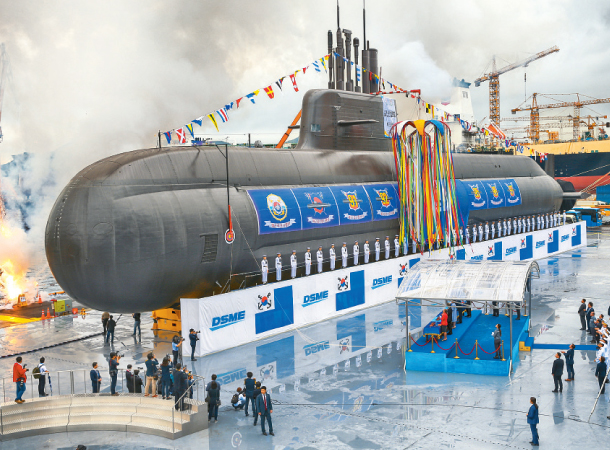 Daewoo Shipbuilding and Marine Engineering (DSME) said Friday that it has won a total of 1.56 trillion won ($1.31 billion) worth of orders to build a submarine and two liquefied natural gas (LNG) carriers.

The 3,000-ton submarine, ordered by Korea’s arms procurement agency Defense Acquisition Program Administration for 1.11 trillion won, will be used by the Korean navy.

DSME is still building the two submarines, ordered in 2012, and once they are completed, they will become the first 3,000-ton submarines built with Korean technology.

The two LNG carriers are for an American shipping line, DSME said, without revealing the name. The carriers will be built at 174,000 cubic meters (6.1 million cubic feet). DSME said the two ships will be built with its full re-liquefaction system and ME-GI engine that will increase the ships’ fuel efficiency by 30 percent and reduce pollutant emissions by 30 percent.

With the latest addition to its order book, the Korean shipbuilder said it has won $4.27 billion worth of orders to build 20 vessels this year including nine LNG carriers, seven very large crude carriers and four submarines, achieving roughly 51 percent of its annual target of $8.37 billion.

It’s not only DSME that’s increasing its order backlog.

Thanks to the latest orders, Samsung Heavy has won $5.4 billion worth orders, achieving 69 percent of this year’s $7.8 billion target it said.

Hyundai Heavy Industries said Thursday it signed a deal worth 676.6 billion won with the Defense Acquisition Program Administration to build a next-generation Aegis destroyer. The new destroyer will be 170 meters (558 feet) long, 21 meters wide and weigh 8,100 tons. The shipbuilder said it will be able to sail at a maximum 30 knots. The delivery is scheduled for November 2024.

Hyundai Heavy said it and its shipbuilding affiliates - Hyundai Samho Heavy Industries and Hyundai Mipo Dockyard - have achieved 45 percent of this year’s target by winning orders to build 90 ships worth $7.1 billion so far, including the Aegis destroyer.

Despite the list of orders Korean shipbuilders won early this month, they failed to hold onto the top spots in terms of total size of orders won last month, according to global marine industry tracker Clarksons Research.

While Korean shipbuilders won 320,000 compensated gross tonnage (CGT) orders, Chinese competitors won 740,000 CGT worth orders in September. CGT is commonly used in the shipbuilding industry as an indicator of the amount of work that is necessary to build a given ship.

Korean shipbuilders had kept the first place spot for four months from May through August, but failed to do so in September.

As for accumulated orders this year until September, China took the lead with 5.98 million CGT, followed by Korea with 5.27 million CGT and Japan with 1.96 million CGT orders.