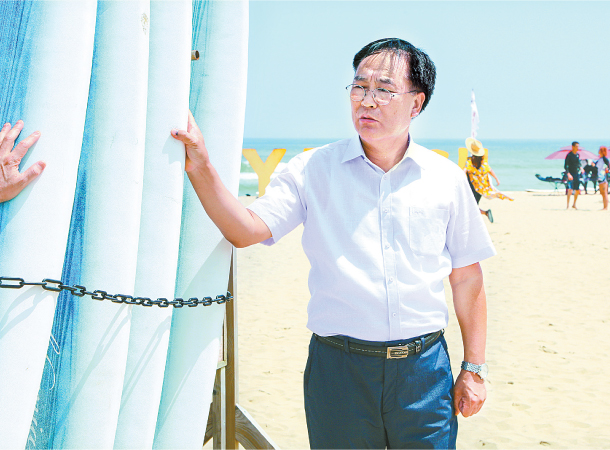 Kim Jin-ha, 59, head of the Yangyang County Office, shows a surf board at Jukdo Beach in Yangyang, Gangwon, in June. [YANGYANG COUNTY OFFICE]

What once was a small fishing village in Gangwon on the east coast of Korea has transformed into a hot spot among young people to enjoy surfing within just a few years.

Surfing has had a dramatic effect on various areas of Yangyang including tourism, economy and its population. The population of Yangyang, which had been on the decrease, marked a rise in May of last year. According to the Yangyang County Office, the population this year totaled 27,643, which is 324 more than last year.

And that county’s success has been attributed to one man, Kim Jin-ha. Since being elected as the head of the Yangyang County Office in 2014, Kim has made it his mission to promote surfing-related projects.

“As more young people came to Yangyang, it became a place full of energy,” Kim said. “All I talk about with people these days is surfing.”
The JoongAng Ilbo met with Kim in Yangyang County Office on Sep. 25. Below are edited excerpts of the interview.

Q. What do you think about Yangyang County’s recent rise in popularity among young people who enjoy surfing?

A. During dinner with an army official yesterday, we only talked about surfing. Young people who took just one lesson became interested in surfing and keep coming to enjoy it. As many young people started to enjoy surfing, nearly 70 surf shops have been opened in Yangyang in recent years. We are in the process of establishing various surfing-related businesses to build the infrastructure for surfing including the “Yangyang Surfing Festival 2019” which will be held on Oct. 11.

Is it true that Yangyang County provides surfing lessons for public officials?

Surfing lessons were given to public officials of Yangyang County last July. Of all 500 employees, 300 of them received the lessons. We decided to provide them because we thought that they, as public officials in an area popular for surfing, need to understand exactly what surfing is. From now on, [I believe] they are able to work on related projects with much better understanding.

What do you think is the reason for the increasing population in Yangyang County?

Yangyang is one of the few local governments nationwide where the population is growing. In Yangyang, about 400 people die and about 120 to 130 new babies are born annually. However, the population has increased this year. Since accessibility has been improving with the opening of the Seoul-Yangyang highway and the number of surfing-related business has increased, more youths started to come to Yangyang. Also, more people start to buy their second homes, where they can go on the weekends and vacations to rest and enjoy their spare time, in Yangyang.

The Ministry of Environment is against the construction of a cable car system in Yangyang on one of the country’s most beloved mountains, Mount Seorak. What are your office’s plans for the project?

We have been promoting the project for 20 years. I feel bad that this project is being treated the same way as it was by the previous government. A rally for all county residents will be held on Oct. 10. We are also preparing for legal action.

Despite opposition to the cable car project, the government has approved a plan for the construction of transmission towers in Gangwon. Will you work with the committee formed to protest against the construction?

The purpose of not allowing the cable car construction project is to protect the Baekdudaegan Mountain Range. However, in fact, many 100-meter (328-foot) transmission towers are placed all over the Baekdudaegan Mountain Range. For constructing the cable car, only about six props up to 40 meters (131 feet) in length will be installed without cutting down any trees. Also, the path to Daecheongbong, a high point of Mount Seorak, is mostly 10 meters (33 feet) in width. Wild animals are not able to survive in this mountain since hundreds of people climb it every morning. The construction of the cable car system can actually reduce the environmental damages.