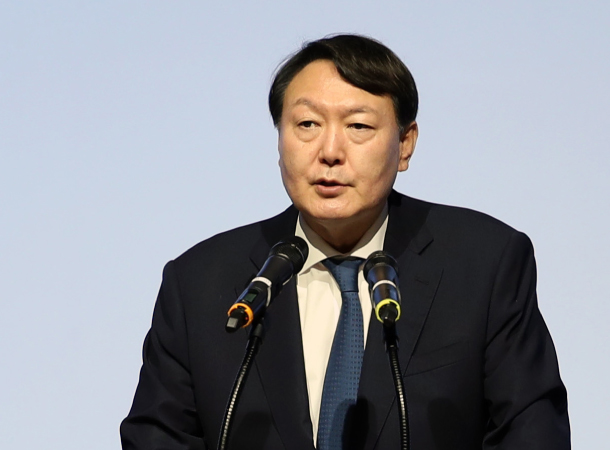 The Hankyoreh newspaper on Thursday published a report saying the prosecution, during its reinvestigation of a sex scandal involving former Vice Justice Minister Kim Hak-eui, obtained testimony from Yun that Yoon also received sexual favors at his private villa in Gangwon, but did not look into it.

Yoon’s name appeared in the records of the initial investigation into the sex scandal in 2013, but prosecutors reinvestigating the case this year did nothing about it, according to the report by a journalist from the newspaper’s affiliated weekly magazine Hankyoreh 21.

In March, President Moon Jae-in ordered police and prosecutors to get to the bottom of three sex scandals. One of them was a case involving Kim, who stepped down from the vice justice minister post after six days due to allegations that he had attended parties thrown by Yun, who hired women to have sex with high-profile figures in order to gain business favors.

In two separate probes in 2013 and 2014, the prosecution had cleared Kim of all charges. The reinvestigation took place on Moon’s order, and Kim was indicted in June for receiving sexual favors and bribes. Yun was indicted on fraud and rape charges.

The prosecution concluded that Kim had frequented Yun’s private villa in Wonju, Gangwon, as well as apartments in southern Seoul, where he allegedly received sexual favors from multiple women on 13 different occasions from July 2006 to December 2007.

According to the Hankyoreh report, the reinvestigation team from the Supreme Prosecutors’ Office included Yun’s testimony that Yoon was also a guest at his sex parties in its report. The report was submitted to the prosecution through a special commission of the Justice Ministry, but the prosecution never probed the claim, the report said. At the time, Yoon was head of the Seoul Central District Prosecutors’ Office.

Yoon, appointed by President Moon to head the prosecution in July, flatly denied the Hankyoreh report. “I have not lived such a messy life to have visited a village of a contractor and befriended him,” senior officials of the prosecution quoted Yoon as saying.

According to one official, Yoon reportedly claims to have led a meticulous, blame-free life and stayed away from situations that could invite misunderstandings. “I visited Wonju just once about 20 years ago. I have never been to Wonju other than that trip,” Yoon was quoted as saying.

The Supreme Prosecutors’ Office formally issued a statement to refute the Hankyoreh report. “It is completely false. Prosecutor General Yoon has no acquaintance with Yun and never visited that villa.”

The prosecution admitted rumors had existed but the Blue House looked into them and cleared Yoon. “During the vetting process for the prosecutor general, the office of the senior presidential secretary for civil affairs had looked into conspiracies and slanders against Yoon and concluded they were all groundless,” it said.

At the time, controversial Justice Minister Cho Kuk was senior presidential secretary for civil affairs. Cho said Friday that he had nothing to say about the report.

The Blue House reacted sensitively as the report could possibly involve the vetting process once done by Cho. Asked about the prosecution’s statement that the senior civil affairs secretary’s office, then headed by Cho, had scrutinized the rumors involving Yoon and concluded them groundless, a presidential aide said Friday, “I don’t know if there ever was a verification or what was verified if there was one.”

Cho and the prosecution led by Yoon are currently at odds as Cho is pushing reform initiatives to weaken the prosecutors’ powers, a campaign pledge by President Moon. At the same time, the prosecution is investigating alleged academic fraud and financial crimes of the Cho family, uncovered during the confirmation process of the justice minister.

The prosecution expressed skepticism Friday about the conspicuous timing of the report.

“It is extremely undesirable that a false, slanderous report was published during an important investigation,” the Supreme Prosecutors’ Office said. “We will take civil and criminal actions against this groundless report.”

A senior prosecutor who led the reinvestigation into the Kim scandal also told the JoongAng Ilbo Friday that there was no connection between Yoon and the scandal.

“Yoon’s name does not appear in the past investigation records,” said Yeo Whan-sup, head of the Daegu District Prosecutors’ Office who led the reinvestigation earlier this year.

According to Yeo, Yoon’s name appeared once in a report from a member of the fact-finding team, who had a tea-time meeting with Yun before the reinvestigation formally took place from April till June. “So I asked Yun about it during our reinvestigation.

Yun did not recall mentioning Yoon at all during the meeting with the fact-finding team. He said he does not know Yoon at all.”

Yeo said the fact-finding team’s meeting with Yun was not a formal investigation. “It was not a statement that they had created while questioning Yun. It was a summary created after the meeting. There was no audio recording or transcript. There was no signature from Yun on the statement,” Yeo said.

“Yoon does not appear in any investigation records concerning the scandal,” Yeo said. “It is lamentable that the journalist published the report without checking the facts with me. Yoon and Yun have no ties. That is the conclusion and we’ve never attempted to cover up any claim.”

The ruling and opposition parties reacted differently to the Hankyoreh report. Rep. Lee In-young, floor leader of the ruling Democratic Party, said he wants to check the claims made in the report.

Rep. Na Kyung-won, floor leader of the opposition Liberty Korea Party, said the report is a new attack against Yoon.