Estimates for growth continue to spiral down

Estimates for growth continue to spiral down 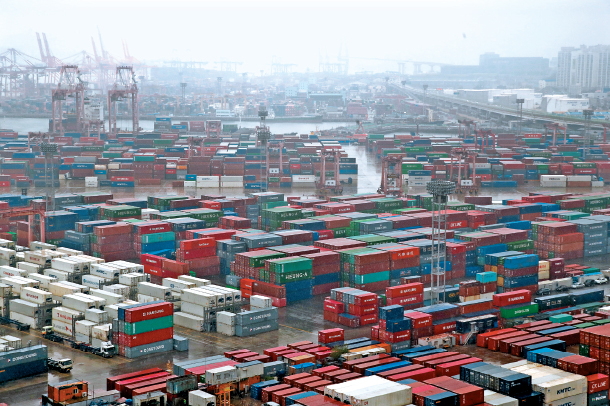 Container cargos are loaded on a dock in Busan on Oct. 1. Last month, exports shrunk 11.7 percent compared to the previous year. Exports have been shrinking for 10 consecutive months. [news1]

With less than three months left on the calendar, nine foreign investment banks have lowered their outlooks for Korea’s economic growth this year to below 2 percent.

According to a report by the Korea Center for International Finance released last week, the investment banks’ average predictions is now 1.9 percent.

This is a sharp drop from the 2.6 percent growth that was the average prediction at the end of last year.

Growth of 1.9 percent would be the slowest in a decade. The last time the Korean economy grew below 2 percent was in 2009, in the wake of the global financial meltdown of 2008. The Korean economy’s growth in 2009 was 0.9 percent.

The economy is being hurt by weak investment and consumer spending amid challenging external factors including the ongoing trade war between the United States and China and falling semiconductor prices.

HSBC is the only investment bank that still expects Korea’s economy to expand 2 percent.

“There are ample indices that show that the Korean economy is now entering a recession cycle variation in terms of facilities investment, industrial projections and pre-tax incomes,” said Shin Se-don, a Sookmyung Women’s University economics professor. “There are worries that Korea is entering a Japanese-type long-term recession once low growth and low inflation become fixed.”

However, the government remains optimistic.

“It will be difficult to meet the government’s economic growth target [between 2.4 and 2.5 percent],” Finance Minister Hong Nam-ki told lawmakers on Oct. 2 during the National Assembly audit.

“While there are several research centers that project growth in the 1 percent range, many still believe in growth of more than 2 percent.”

The government, Blue House and ruling Democratic Party argue that the weakening of the Korean economy is not structural but cyclical - and that Korea is doing better than some other countries.

They have been emphasizing that Korea this year joined the so-called 30-50 Club, advanced economies with gross national income per capita of $30,000 or more and 50 million or higher populations.

Others argue that Korea shouldn’t have low growth rates like the other advanced economies in the 30-50 Club including the United States, Japan, Germany, Britain, France and Italy and should be growing faster.

If Korea’s economic growth is under 2 percent, it will be lower than that of the global economy, which is expected to grow at 2.9 percent.

“Since the government has been cherry-picking statistics, there’s a difference with what that public actually feels in terms of the economy,” said Yoo Gyeong-joon, a professor at the Techno Human Resource Development Graduate School at Korea University of Technology and Education, who once served as head of Statistics Korea, the government’s statistical agency.

“The lives of the public can only improve when [the government] admits when the results of its economic policy turn out to be the opposite of their intentions,” Yoo said, “and makes changes to the policies accordingly.”

In her first public speech last week, Kristalina Georgieva, the new head of the International Monetary Fund, advised Korea to expand its spending to defend itself against a looming crisis.

“In 2019, we expect slower growth in nearly 90 percent of the world,” Georgieva said. “This widespread deceleration means that growth this year will fall to its lowest rate since the beginning of the decade.”

Singling out Korea, Germany and the Netherlands, Georgieva said these countries should increase spending especially in infrastructure and research and development to boost demand and their growth potential.