Rendez-Vous with Lim Hyun-sik’s new solo EP: Member of BtoB took inspiration from space and the universe for the 5 tracks

Rendez-Vous with Lim Hyun-sik’s new solo EP: Member of BtoB took inspiration from space and the universe for the 5 tracks 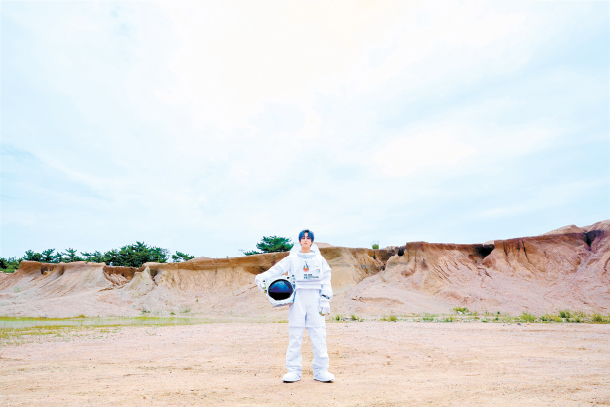 You probably have a playlist for a long road trip, for a rainy day or to get in the mood for a big night out with your friends, but singer Lim Hyun-sik would like you to make one more playlist with his new music: to listen to when you’re traveling in space.

Lim, a member of boy band BtoB and also known by his stage name Hyunsik, makes his solo debut today with the five-track EP “Rendez-Vous,” filled with songs inspired by the universe and the mysteries of space that the singer would one day like to witness himself.

Lim sat down with the Korea JoongAng Daily on Friday prior to the release of the album at Cube Entertainment’s Cube Cafe in eastern Seoul.

“I keep notes of what I come up with whenever I get ideas, especially from watching movies,” he said. “And there was this part that talked about quantum entanglement in ‘Only Lovers Left Alive’ (2013) directed by Jim Jarmusch. I wanted to write a song about it, and it’s similar to other songs as well. I really like watching videos from NASA or watching space movies.”

Such inspiration is visible in the lead track “Dear Love,” a song taken from the idea of how molecules that split into two are still connected to each other through quantum entanglement and share their thoughts - something Lim likened to how love works. There may be a person out there who’s connected to you even when you’re halfway across the universe “as if you were one from the beginning,” said Lim.

The other tracks also stemmed from Lim’s musings about space. While the title track “Rendez-Vous” was written while thinking about what it would actually be like to be in space, “Docking” expresses the beauty of a relationship by comparing it to two spaceships docking. Likewise, “Black” was inspired by black holes and “Moonlight” by the revolving moon.

“I thought as a child when I was praying, I was actually sending a message to space,” Lim said. “So if I prayed so hard and gave all my heart, then the universe answered by letting that happen. It sounds religious - it isn’t. I just feel more fulfilled to think that something happens because I wanted it to happen.

“I even wanted aliens to kidnap me and give me just one superpower - to be able to teleport. I’d like to go to space, Mars or Jupiter. Apparently, the Earth looks so beautiful from there. I’d like to see that. And who knows? The songs might be a big hit on other planets.”

Lim had already proven himself as a songwriter as a part of BtoB, birthing some of the group’s biggest hits such as “Missing You” (2017), “Only One for Me” (2018) and “Beautiful Pain” (2018). And for his very first EP, he pushed himself to write all the songs, lyrics and even take the lead in rearranging all of the songs by himself, which range from alternative rock, synth pop and ballad.

“I listen to diverse genres, and I like all of them,” he said. “In fact, I don’t really think the idea of genres matters these days. Even with my songs, some people could think they’re ballad-like, while others feel it close to rock. I did want to go with a [rock] band sound, but I think it’s just nice to have the chance to express my own colors through my songs.”

But this is just the beginning for the singer, with more ideas to come gradually in the future. He rates his EP seven out of 10 - not because he doesn’t like his work, but because he has so much more to show.

“It was hard to fill a whole song on my own, when I was used to having seven members with me,” he said. “But there are songs that I haven’t shown, and this is an EP. I’d like to show more next time, perhaps with a full-length album. Maybe after I finish my military service? But I didn’t want to rush anything this time.”

According to Lim, “Rendez-Vous” isn’t just a title about love, but also a phrase he’d like to use to describe how he meets with fans as a new solo artist for the first time.

“I’ve liked space since I was young - the idea of the universe and aliens. I’ve always wanted to go there, which is why I came up with the question, ‘What music would I like to listen to when I’m in space?’ I hope that people will listen to it when they’re out there in space,” Lim said.

He added, “But before we get to do that, it will also be nice to listen to at night when you go for a drive, looking at a starry sky.”