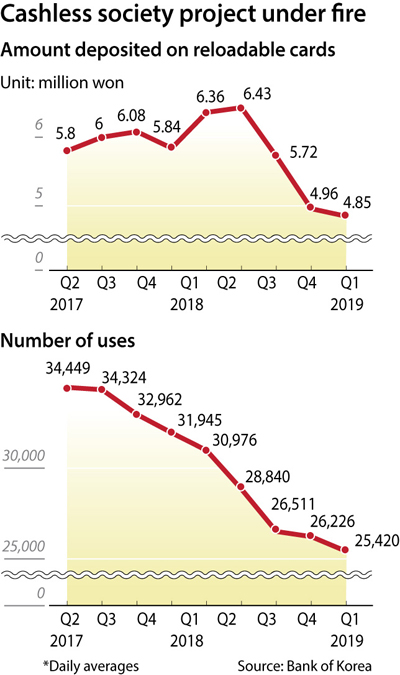 The central bank’s grandiose plan to turn Korea into a “coinless society” has fallen apart, at least in its first phase, due to a lack of promotion and lukewarm response from the public.

In a roadmap announced in 2016, the Bank of Korea (BOK) proposed reducing the circulation of coins and the fees needed to mint them by 2020 by targeting loose cash from convenience stores.

The idea is that customers at convenience stores can deposit loose cash onto reloadable cards like T-Money, a public transit pass, and gift cards.

Two years since the project’s implementation, the initiative was met with little enthusiasm from customers, according to BOK data revealed during a national audit last week.

The amount of cash loaded onto prepaid cards or rewards points has been steadily declining, falling 16.6 percent to 5.8 million won ($4,879) as of the second quarter this year, compared to the same period in 2017 when the project began.

When converted into the number of exchanges per day, the figure also plunged 26 percent to 25,420 from 34,449 two years ago.

Considering that partnered retail shops number over 36,000, it turns out that a convenience store handles less than one coinless request per day, on average. Participants include 7-Eleven, GS25, CU and Emart 24, as well as big discount chains like Emart and Lotte Mart.

Rep. Kim Chung-woo of the ruling Democratic Party said that the BOK’s failure to communicate the effort led to scant awareness of the program in the public sphere.

“Lack of proper promotion and a business model oriented toward suppliers - rather than consumers - led to the poor performance of the project,” the lawmaker said in a statement. “In the beginning, the BOK was active in promotional activities such as putting banners at schools and outdoor billboards advertising in downtown areas, but later there has been little or no record of such efforts.”

Kim noted that the central bank spent 2.5 percent of budgets allocated to the coinless society initiative in 2018 and refrained from executing any budget this year.

A BOK source explained that the budget is supposed to be used throughout the rest of the year as the bank plans to enter into the second phase of the coinless society trial.

“We plan to launch a new related service that will load loose change directly onto one’s bank account in the fourth quarter and resume promotions by the time we launch the service,” a source in charge of the proposal said.

Yet, consumers are not the only one in the dark on the project - the service sometimes goes unnoticed by providers.

Cashiers from three partnered convenience store chains - 7-Eleven, CU and GS25 - within 600 meters (0.4 miles) of the BOK’s headquarters in central Seoul told the Korea JoongAng Daily that they had no knowledge of the initiative.

When asked to load loose change onto a transit card, an employee at GS25 in Bukchang-dong in central Seoul said, “I am not sure if we have such functions, and I don’t know how to handle it even if they exist.”

Even if one happens to know what the coinless project is, they found it inconvenient since each retailer and convenience store has a different rule.

For instance, CU and GS25 allow for depositing onto transportation cards such as T-Money and Cash Bee, whereas Lotte Mart and Emart only accept transactions with their own rewards programs.

7-Eleven, on the other hand, handles Cash Bee and points from Lotte’s retail affiliates and Naver Pay.

The BOK official acknowledged the shortcomings but said the bank has no plans to reform the initiative.

“Because the retail shops have their own infrastructure and system, it is hard to incorporate it into a comprehensive one,” the source said. “And when the BOK first planned the project, we didn’t propose establishing a new infrastructure that could encompass all participants. So, we will leave it as it is for now, but we will add the new option [of depositing money onto bank accounts].”