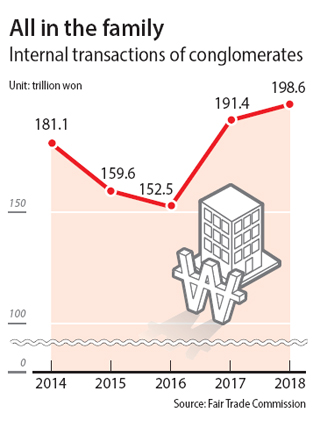 Despite the Moon Jae-in administration’s dogged attempts at dissuasion, conglomerates’ internal transactions - groups’ subsidiaries doing business with each other - have continued to grow.

Korean governments, particularly liberal ones, consider this a form of monopoly behavior and encourage more transactions outside of groups.

The study was based on business dealings of 1,826 affiliates of 59 conglomerates. The revenue from internal transactions last year accounted for 12.2 percent of all revenue, which was a 0.3 percentage points increase compared to the previous year.

Last year, internal business transactions in the top 10 conglomerates amounted to 151.1 trillion won, which was a 6.4 percent increase over the previous year.

The internal transactions of the top 10 conglomerates now account for 13.8 percent of the total conglomerates’ overall revenue, which was up from 13.7 percent in 2017.

SK topped the list with 46.4 trillion won in internal transactions, 25.2 percent of revenue, which was a slight drop from 26.79 percent a year ago.

Next came Hyundai Motor with 33.1 trillion won in internal transactions, 19.37 percent of total revenue, up from 18.62 percent a year ago.

Samsung Group came in third with 25 trillion won, 7.66 percent of total revenue, up from 7.61 percent the previous year.

However, the biopharmaceutical conglomerate Celltrion took the top spot for the greatest share of internal transactions - its 800 billion won in transactions accounted for 41.4 percent of revenue.

The study found that internal transactions tended to be larger when families that controlled conglomerates held relatively large share holdings.

Since the Moon administration began in May 2017, the government has been cracking down against internal transactions, which it believes failed to share growth and denied business opportunities to small- and medium-sized enterprises.

FTC Chairwoman Joh Sung-wook, a former economics professor at Seoul National University who started on the job last month, has vowed a crackdown on illegal internal transactions within business groups regardless of their size.

During a press conference in late August, Joh said large businesses shouldn’t be penalized just because of their size. But unfair practices should not be given a pass, she said.

“I believe large companies [chaebol] have contributed a lot to our economic growth through outstanding management abilities,” Joh said. “But at the same time, founding family members continue to govern with small share holdings and still have practices like giving too much work to affiliates, which are areas that need improvements.”

“In the end, it is [also] a loss for conglomerates due to an inefficiency of allocation of resources,” Joh said.