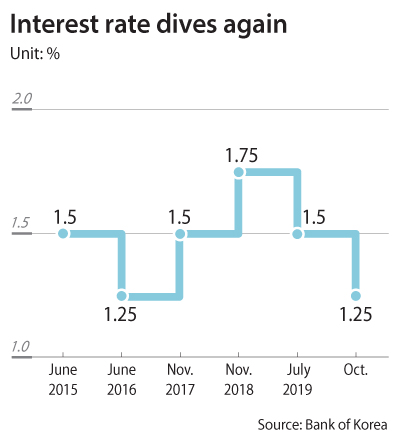 Korea cut its key interest rate to its historic low Wednesday as the central bank tries to guide the economy through deteriorating conditions.

The Bank of Korea (BOK) trimmed its benchmark interest rate from 1.5 percent to 1.25 percent only three months after the last cut. The last time the rate was that low was in June 2016.

And yet the decision, which was in line with a market consensus, faced two dissenting votes from board members Lim Ji-won and Lee Il-houng.

Governor Lee Ju-yeol said the move was justified because of the uncertain trajectory of economic growth and stubbornly low inflation.

“[The BOK] cut the benchmark interest rate to 1.25 percent in the face of anticipated lower economic growth and low inflationary pressure on the supply side,” he said.

As noted by Lee, Korea is facing a multitude of economic headwinds at home and abroad, ranging from weak exports, tepid investment and persistently low inflation to external uncertainties stemming from the ongoing trade dispute between the United States and China, Britain’s Brexit and Japan’s export restrictions on Korea.

The market is anxiously wondering if a further rate cut is on the cards, which would put Korea on uncharted territory.

The governor said that there is still “room for maneuver” in monetary policy.

But Lee hinted that the central bank will take a cautious approach given that the bank already used the monetary policy weapon twice in a relatively short time.

“[The BOK] will factor in the impact that major external conditions have on the economy and consumer prices, changes in financial markets and the effects of two cuts in July and this month when determining [a further rate cut],” Lee said.

Analysts expect that the next cut could come as early as the first half of next year.

“The latest monetary policy meeting was more hawkish than expected,” said Baek Yoon-min, a fixed income analyst at Kyobo Securities, “Therefore, we maintain the previous view of a cut in the first half of next year since it would take a while for the external risks such as the U.S.-China trade dispute to be eased.”

Huh The-o, an analyst at Samsung Securities, projected that the next cut could come in February.

“The unexpected dissenting votes limited the impact of a rate cut, but the probability of another cut in the first quarter stands at 60 percent,” he said, “because the uncertainties surrounding external conditions won’t likely be resolved soon, and even if they are resolved, it will take time to translate into higher inflationary pressure and improvement of economic growth.”

The International Monetary Fund on Tuesday lowered its growth projection for this year to 2 percent, a sharp drop from 2.6 percent expected six months ago.

As for next year, the governor painted a positive picture.

“Next year’s growth will likely fare better than this year, based on the assumption that global economic and geopolitical conditions will improve,” the governor said.