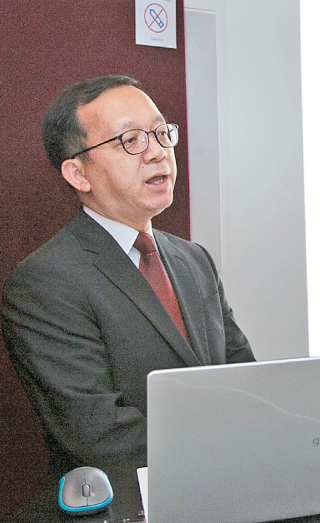 SK Telecom on Wednesday said it will expand 5G services overseas next year through cooperation with foreign network operators. The mobile carrier also vowed to raise the speed of its 5G services in Korea by 2020.

During a press event held in Zurich, Switzerland on Tuesday, the company said it will offer 5G roaming service in more than four countries this year and more than 20 next year. Mobile carriers in the United States, China and Japan will be some of its partners.

The company currently has only Swisscom as a 5G roaming partner. The two carriers teamed up to start offering reciprocal services since July. SK Telecom, KT and LG U+, introduced 5G in Korea in April and were followed by Verizon in the United States.

Switzerland is the first European country to activate 5G.

A total of 3,000 SK Telecom users have connected the network in the country over the past three months in Switzerland, according to the mobile carrier.

SK Telecom said it has been seeking 5G partners since December last year to speed up the commercialization of the 5G roaming services. It formed a special task force in February that specializes in marketing, technology and equipment for 5G services abroad.

The telecommunications firm said it plans to develop a Standalone 5G network and cooperate with foreign network operators to make that service available for domestic network users traveling abroad.

The 5G networks currently available in Korea and abroad are Non Standalone (NSA) 5G, which means the 5G network has been deployed atop the existing LTE networks. Standalone (SA) 5G is expected to raise the speed of the network and also lower the latency.

SK Telecom said it will develop an SA network for roaming by next year. This could double the speed of the existing 5G network, according to the company.