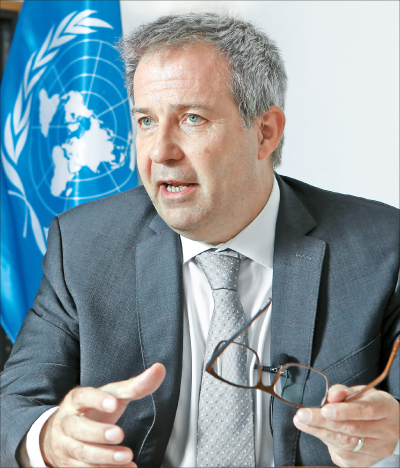 With less than a year until Korea hosts the world’s largest anticorruption forum, Stephan Klingebiel, director of the UNDP Seoul Policy Centre for Global Development Partnerships (USPC), is hopeful that the conference will allow Korea to share its knowledge on the topic with other countries on a prestigious platform and put “peer pressure” on them to improve.

With nearly 2,000 people from the public and private sectors expected to gather at Coex in Gangnam District, southern Seoul, next June for the 19th International Anti-Corruption Conference (IACC), Klingebiel said he’s positive that the meeting will create momentum in the international community’s fight to root out fraudulent conduct.

“This is a place where Korea can give really good evidence on how Korea managed corruption in the past and how it’s managing corruption risks today,” said Klingebiel. “Plus international conferences tend to put peer pressure on governments and other actors around the table, and other countries will be looking at the success story of Korea.”

During an interview with the Korea JoongAng Daily at the USPC’s office in Seongbuk District, central Seoul, on Monday, Klingebiel discussed how his organization is cooperating with the Anti-Corruption and Civil Rights Commission (ACRC), a Korean government agency, on sharing its anticorruption knowledge with other developing countries, and the positive feedback that his organization has been receiving.

Q. For some of our readers who don’t know about the USPC, could you briefly explain your organization and its functions?

A. For more than 40 years from 1963 to 2009, the United Nations Development Programme (UNDP) worked with the people and the government of Korea, delivering some 270 projects in 20 areas mirroring Korea’s development path. The UNDP closed the Korea office in 2009 as the country joined the Organisation for Economic Cooperation and Development (OECD) Development Assistance Committee, affirming Korea’s status as a highly developed country and a significant contributor of development aid. The UNDP Seoul Policy Centre, or USPC, was established in 2011 with the objective of brokering new partnerships between Korea and the developing world through UNDP networks. The USPC is co-funded by the Korean Ministry of Foreign Affairs and the UNDP.

We serve as the immediate interface with the Korean government on all aspects relating to the evolving Korea-UNDP partnership - serve as a knowledge center for comparative experiences and approaches of new development partners in reducing poverty and achieving sustainable human development, and facilitate and promote learning networking, policy dialogue and consultation among new development partners to contribute to capacity development in developing countries.

I’m aware that your office signed a memorandum of understanding (MOU) with the ACRC in 2015 to share Korea’s efforts in the fight against corruption with other developing nations. How has that partnership turned out over the years? What projects have you cooperated on?

Out of many innovative corruption prevention tools, the USPC selected two tools for sharing with developing countries: the Anti-Corruption Initiative Assessment (AIA) and the Corruption Risk Assessment (CRA).

The AIA provides an annual monitoring and evaluation mechanism for government and public institutions on their anticorruption activities, while generating incentives for voluntary anticorruption efforts through performance-rating and public release of the institutional performance ratings. This has been shared with Vietnam, Malaysia, Uzbekistan and Moldova.

The CRA provides a systematic criteria of analysis for corruption risks that exist in laws and regulations, and therefore helps remove corruption risks from legislations. This has been shared with Kosovo and Myanmar.

What role does the USPC actually play between developing countries and the ACRC?

The USPC has worked with the ACRC in packaging the ACRC’s policies and experiences in concrete ways that other countries can learn from. We work with UNDP country offices to ensure that Korea’s anticorruption experiences actually make the transition into the country’s governance system, as was the case of the successful pilot project in Vietnam. Such a triangular development cooperation involving the ACRC with the right “matchmaking” by the UNDP can make a difference for our partner countries in meeting the countries’ demands and creating an impact.

It’s really positive. Looking at the example of Vietnam, when it introduced Korea’s anticorruption approach to all of its 63 provinces, I think that itself was a success indicator because Vietnam wouldn’t have done so if it weren’t so convinced about the Korean approach. We’re using our networks, our expertise to take Korean experiences abroad, and many countries are expressing their interest.

Seoul is expected to host the 19th International Anti-Corruption Conference next June, and the Korean government has high hopes for it to promote Korea’s anticorruption campaign to the world. What are your prospects?

First of all, I think Korea should be really proud to be the host country for this very important international conference. This is a place where Korea can give really good evidence on how Korea managed corruption in the past and how it’s managing corruption risks today. Plus, international conferences tend to put peer pressure on governments and other actors around the table, and other countries will be looking at the success story of Korea, which I think Korea should be really proud of.

How do you think a developed country like Korea sharing its anticorruption experiences with other developing countries actually helps them?