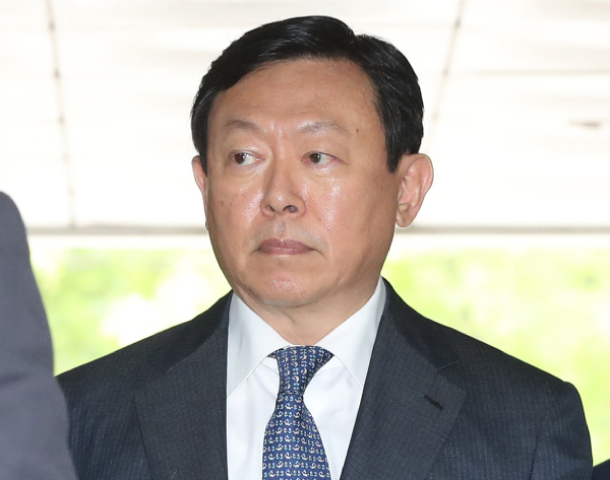 The Supreme Court on Thursday allowed Lotte Chairman Shin Dong-bin to stay out of jail, upholding a lower court conviction that he bribed ousted President Park Geun-hye - and its suspended jail sentence of 30 months.

Korea’s highest court concluded a three-year court battle by rejecting appeals from both Shin and the prosecution and upheld the Seoul High Court’s conviction and its suspended sentence, allowing Shin to remain out of jail.

The 64-year-old head of the country’s fifth-largest conglomerate was indicted in 2016 on charges of bribing former President Park through her close friend Choi Soon-sil. He was accused of giving 7 billion won ($5.9 million) to a nonprofit foundation controlled by Choi in order to win a lucrative duty-free deal.

An appeals court, however, freed him from prison last October, handing down a suspended prison sentence and canceling the 7 billion won fine.

“We want to issue an apology to the people for having troubled them,” Lotte Group said Thursday. “We will bear in mind the advice and concerns offered by many and work hard to contribute to the country and society in order to regain public trust.”

The Supreme Court also noted that its decision Thursday was consistent with its earlier ruling on a separate but related case involving Park, Choi and another tycoon.

In August, the court ordered a retrial of a bribery case involving Park, Choi and Samsung Group’s de facto leader Lee Jae-yong, overturning a lower court’s decision that dismissed key bribery convictions. The court found that the Seoul High Court’s decision of what constituted bribery in Lee’s appeals trial was too narrow. It said that three horses given by Samsung to Choi as part of a sponsorship of her daughter’s equestrian training qualified as a bribe, as did Lotte’s offering of the 7 billion won to Choi’s K-Sports Foundation, although that amount was later returned to the conglomerate.

The court upheld Shin’s conviction of having conspired with Shin Kyuk-ho and causing a loss to the company by leasing snack bars inside Lotte Cinema theaters to family members.

The court also upheld the lower court ruling that Shin Kyuk-ho was guilty of embezzlement and breach of trust and must serve a three-year prison term. He was also fined 3 billion won. Due to his poor health and old age, the Lotte founder has not been jailed, despite a number of convictions and jail sentences in the initial and appeals trials.