Lee may act as mailman in Abe meeting

Lee may act as mailman in Abe meeting 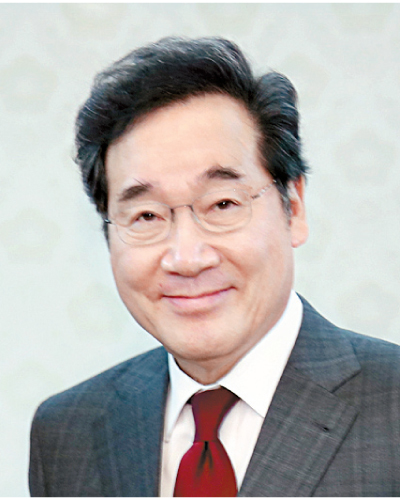 Prime Minister Lee Nak-yon may be delivering a letter from President Moon Jae-in to Japanese Prime Minister Shinzo Abe during his visit to Tokyo in the coming week, in the hope of patching up bilateral relations that have recently deteriorated over trade and wartime forced labor issues.

“I hold a regular meeting with President Moon every Monday, and during our last meeting, the president asked me of my opinion regarding writing a letter [to Abe],” Lee told Kyodo News and The Asahi Shimbun Friday. “I told him that it would be a good idea.

“I would like to provide a small platform for the two nations to improve relations,” Lee said. “I will listen to Abe’s words sincerely, and in turn, do my best to explain the thoughts of Moon and myself.”

Lee will be in Tokyo from this coming Tuesday to Thursday to attend the enthronement ceremony for Japanese Emperor Naruhito. He is expected to meet with Abe on Thursday, according to an official of Lee’s office.

Lee, who is fluent in Japanese, is considered in a favorable light by some experts in Japan for his previous experience as a reporter based in Tokyo and as vice chair of the Korea-Japan Parliamentary Friendship Association.

Bilateral relations have been strained amid Japan’s trade restrictions on exports to Korea and Japan’s removal of Korea from its list of favored trading partners in August. Local experts in Korea read the moves as retaliation from Japan following the Korean Supreme Court’s rulings last year ordering Japanese companies to compensate Korean victims of Japanese wartime forced labor.

The same month, Korea decided it would pull out of its military intelligence-sharing pact with Japan, the General Security of Military Information Agreement (Gsomia), which was signed in 2016 and has since been renewed annually.

“If Japan rescinds trade restrictions on Korea, then we can reconsider the decision [to pull out of Gsomia],” Lee said in the interview. “With dialogue, it would not be impossible for the two nations to return to the way things were before July.”

Lee in the interview also mentioned the forced labor issue.

“The current state of things is unfortunate,” he said. “There are behind-the-scenes talks taking place between the two countries, and I believe they can speed up with the support of both leaders.”

During the Japanese colonial period (1910-45), about 299 Japanese companies subjected hundreds of thousands of Korean workers to forced labor. The companies include Toyota, Sumitomo Metal Mining, Hitachi and Toshiba.

The Supreme Court of Korea ruled last year that two Japanese companies must compensate the Korean forced laborers. The top court recognized that the Japanese government failed to acknowledge the illegality of its colonial rule and that the victims’ rights to individual compensation had not expired.

Korea in June this year proposed a joint fund with Japan to compensate the victims together, a proposal Japan rejected.

The Korean government may be willing to discuss the issue with Japan again, without putting its previous proposal forward.

“If we can see a path to resolution, we will hold talks with no preconditions,” Nam Gwan-pyo, Korean ambassador to Japan told the Nikkei Asian Review on Friday regarding the forced labor issue. “I will put all options on the table.

“We are open to all possibilities that could lead to a resolution. And if Japan has a good idea, we are willing to discuss it.”

Korea’s Blue House kept mum on Lee’s said conversation with Moon regarding the letter. “There was a conversation between the two, as you saw in Kyodo News,” a Blue House official told the JoongAng Ilbo on Friday but did not give any further response when asked to confirm Moon’s plan to write a letter to Abe.

In response to a question about whether there is a possibility that Moon and Abe will hold a summit within the year, the official said, “There is not much we can share on any upcoming plan to hold summits with other leaders.”