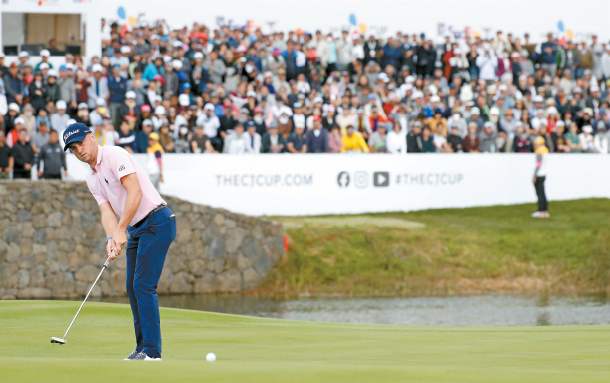 Justin Thomas of the United States strokes a putt at the 18th hole during the final round of the CJ CUP @ NINE BRIDGES golf tournament at the Club at Nine Bridges in Seogwipo, Jeju Island, on Sunday. [YONHAP]

JEJU ISLAND - Justin Thomas of the United States won the 2019 THE CJ CUP @ NINE BRIDGES at the Club at Nine Bridges on Jeju Island on Sunday.

Thomas shot five under par, 67, on the final day to finish two shots ahead of Danny Lee of New Zealand.

Thomas, who started the final round tied for the lead with Lee, got off to a great start with a birdie on the par-4 first.

Thomas then added another birdie on the par-5 third to extend his sole lead. But a bogey on the par-4 fourth allowed him to quickly tie for the lead with Lee, as Lee made a birdie on that hole.

But things changed on the par-4 14th. As Thomas made a birdie and Lee made a par, Thomas returned to the lead. Then, as Lee made back-to-back bogeys on the par-4 15th and the 16th holes, Thomas extended his lead by three.

With Thomas’s bogey on the par-3 17th, he headed into the final hole with a two-shot lead. There was a slim possibility of the two players heading to the playoff, but as Lee just missed his eagle putt, Thomas was declared the winner as both finished their rounds with birdies on the par-5 18th.

With seven birdies and two bogeys on the final day, Thomas finished the tournament at 20 under par, 268. 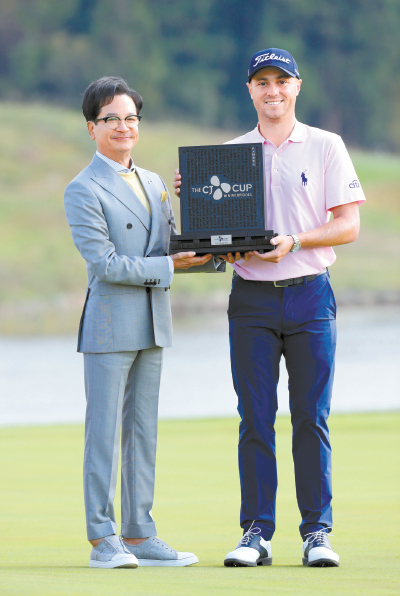 “It feels great,” Thomas said. “It was a very, very tough day. Danny made it extremely difficult. He really made a lot of putts and a lot of unbelievable ups and downs to keep me from getting the momentum. I really played solidly today. Other than the bogey on the 17th, I really felt like I did everything I needed to do to win the tournament today. It was very reassuring knowing that I could hit those shots when I needed to the entire day.”

With a win, Thomas took home the $1.755 million prize and 500 FedEx Cup points. Although this is Thomas’s first win of the 2019-20 season, this is his second win of the year, as he won the BMW Championship in August.

Thomas has an impressive record in Asia. Among his 11 victories on the PGA Tour, four were won in Asia. Thomas picked up two wins at CIMB Classic in Kuala Lumpur, Malaysia - in 2015 and in 2016 - and won the CJ Cup twice on Jeju Island.

Before winning the 2019 edition, Thomas won the inaugural edition of the CJ CUP @ NINE BRIDGES back in 2017.

“It is kind of bizarre, knowing I’ve won four times here,” Thomas said. “I don’t know. I would say the golf courses fit my game well.”

Following Thomas, Lee had to walk away with a disappointing solo runner-up finish. Lee hasn’t won on the PGA Tour since his victory at the Greenbrier Classic in 2015.

“I really wanted to win the CJ Cup,” Lee was quoted as saying on the PGA Tour website. “It means a lot to me to win it in front of the Korean fans and all my Korean family, but it is what it is. I gave my best out there today, and solo second was the best I could do.”

Hideki Matsuyama of Japan shot seven under par, 65, on the final day to finish tied for third with Gary Woodland of the United States and Cameron Smith of Australia at 15 under par, 273. Woodland shot six under par, 66, while Smith shot three under par, 69 on Sunday. Smith had a strong finish to his round as he finished with two birdies and an eagle on his last three holes.

Defending champion Brooks Koepka of the United States withdrew after the second round due to a knee injury. Koepka shot a round of three under par, 69, and three over par, 75, in his first two rounds.

On the final day of the CJ CUP @ NINE BRIDGES, a total of 19,294 fans headed to the course to watch the players. Throughout the four rounds, the tournament saw a total of 46,314 spectators making the trip to the Club at Nine Bridges.

The PGA Tour will continue its 2019-20 season at the Zozo Championship at the Accordia Golf Narashino Country Club in Chiba, Japan, starting from Oct. 24 to 27.