Some students who invaded U.S. ambassador’s house to be arrested

Some students who invaded U.S. ambassador’s house to be arrested 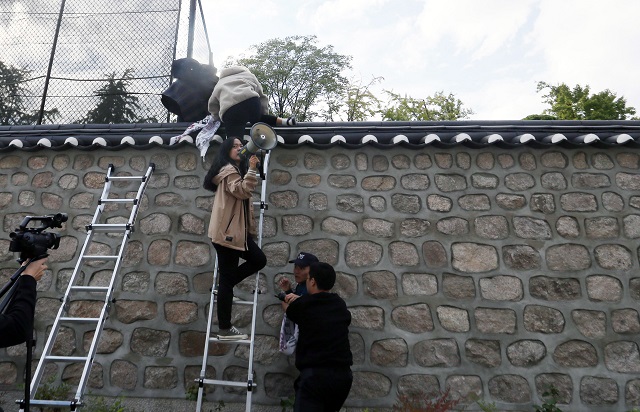 South Korean student protesters climb over a wall during a protest of the Special Measures Agreement at Habib House in Seoul on Friday. According to media reports, the U.S. requested a five-fold increase in South Korea’s contribution to defense costs in September for the deployment of U.S. troops on the Korean Peninsula. [EPA/YONHAP]

Police said they would ask for arrest warrants for some of the student activists who invaded the U.S. ambassador’s house in Seoul on Saturday to protest Washington’s demand for much more money for its troops stationed on Korean soil.

Some 19 members of a group whose name loosely translates as the Korean Progressive University Student Union broke into the residence of U.S. Ambassador Harry Harris in central Seoul using two ladders.

After an hourlong sit-in at the residence, in which the students waved banners calling for Harris and U.S. troops to leave the peninsula, police apprehended nine of the suspects. Prosecutors on Sunday said they would be seeking arrest warrants for seven of the intruders on charges of obstructing law enforcement and trespassing.

In a press conference Sunday morning, the Korean Progressive University Student Union demanded the apprehended students be set free, saying they had justifiably entered the compound, known as Habib House, to protest Washington’s alleged demand that Korea pay around 6 trillion won ($5 billion) for the stationing of approximately 28,500 U.S. troops on the peninsula.

“We entered the residence of U.S. Ambassador Harry Harris to deliver our complaints in person,” a spokesman for the group said. “We condemn the police for excessively seeking arrest warrants in regard to our justified demands.”

The other 10 students involved in the break-in were set free, and prosecutors said they would not seek arrest warrants for them or another pair arrested at the scene.

Harris was not present in the compound at the time, having attended a diplomatic ceremony at the Blue House at the invitation of President Moon Jae-in. In a Twitter post on Saturday afternoon, he thanked the Korean police for their response to the incident, saying it was the second trespassing incident to take place at his residence in 13 months.

The U.S. Embassy subsequently expressed grave concern at the incident, calling on the Korean government to strengthen security for all foreign diplomats. In a statement later that afternoon, Korea’s Foreign Ministry said it requested police to ramp up security for the U.S. ambassador’s residence and the embassy compound at Gwanghwamun Square, adding that there is “no circumstance in which an attack or harm to foreign missions can be justified.”

The group responsible for the incident has been known for anti-American activities in the past, notably a public protest at Gwanghwamun Square in April in which students demanded Washington respect Korea’s military sovereignty by withdrawing its forces from the peninsula.

While the incident may not be representative of public opinion in the country — 78 percent of Koreans believe that U.S. troop presence is important to Korea’s security, according to a Defense Ministry poll from last month — the incident testifies to growing friction between the allies stemming from cost-sharing demands by the Donald Trump administration.

On Friday, the U.S. State Department announced the two countries would be holding bilateral talks from Tuesday to Thursday in Hawaii to discuss the Special Measures Agreement (SMA), which is renewed each year.

Under the current SMA, reached after months of wrangling, Seoul agreed to pay 1.04 trillion won, 8.2 percent more than what it spent last year. Yet with consistent hounding by Trump for allies to pay more for defense, Washington has been expected to demand a steep increase in Seoul’s share this time around, with as much as $5 billion having been floated ahead of the return to talks.

The U.S. State Department release appeared to echo such a demand, saying that the United States would seek a “fair and equitable outcome to the SMA negotiations for both countries that will strengthen and sustain the resilient” alliance, but that Korea “should contribute more of its fair share” in line with Trump’s wishes.