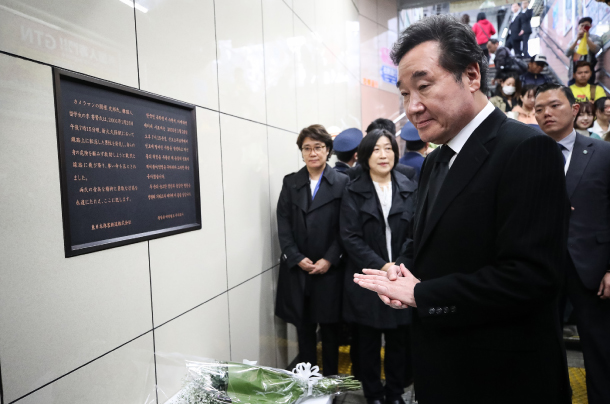 Korean Prime Minister Lee Nak-yon visits a memorial to Lee Soo-hyun, a Korean exchange student who died trying to save a Japanese man who fell onto train tracks in Tokyo in 2001, at the Shin-Okubo Station on Tuesday. [YONHAP]

Korean Prime Minister Lee Nak-yon kicked off on Tuesday a three-day trip to Tokyo to attend the enthronement ceremony for the Japanese emperor with plans to play a role in mending tense bilateral relations between the two countries.

Ahead of his departure for Tokyo Tuesday morning, Lee said, “I don’t expect to be able to resolve everything with this one trip, but this is going to be one step forward.”

Japanese Ambassador to Korea Yasumasa Nagamine saw off the prime minister at the Seoul Air Base in Seongnam, Gyeonggi, around 6 a.m. and expressed thanks to Lee for attending the emperor’s enthronement ceremony.

Lee, who arrived in Haneda International Airport on the president’s private jet around 8 a.m., also has plans to meet with Japanese Prime Minister Shinzo Abe Thursday, and is expected to deliver a letter from President Moon Jae-in, as well as meet with other economic and political figures during his visit amid frayed relations over historical disputes and a trade spat.

Lee attended in the afternoon the enthronement ceremony for Japanese Emperor Naruhito, bringing together dignitaries of over 180 countries. He was accompanied by the Korean ambassador to Tokyo, Nam Gwan-pyo.

Naruhito during the ceremony pledged to “act according to the [Japanese] Constitution” and wished for the “happiness of the people and the peace of the world.”

He expressed his hopes for Japan to contribute “to the friendship and peace of the international community and the welfare and prosperity of humankind.”

Naruhito succeeded his father, former Emperor Akihito, on May 1 after his abdication.

Lee also attended a dinner banquet in the evening.

While the two sides struggle over the wartime forced labor issue and export restrictions, Lee is expected to meet with Prime Minister Abe Thursday morning, where Lee will deliver a letter from President Moon, seen as a move to try to make some breakthrough in the tense relations.

Observers said the visit could play a role in setting a summit between Moon and Abe for later this year. The two leaders didn’t hold bilateral talks at the G-20 summit in Osaka, Japan, in late June.

Lee shared on social media before his departure to Japan, “I congratulate the beginning of the Reiwa era” while expressing condolences to the Japanese people amid recovery efforts from the deadly Typhoon Hagibis.

Lee has strong ties with Japan and, during his time as the Dong-A Ilbo correspondent to Tokyo, covered Emperor Akihito’s enthronement ceremony in November 1990.

The prime minister’s office said in a statement that Lee’s attendance of the enthronement ceremony “represents the congratulations from the government and people of a neighboring country.”

It also said that “separate from the historical issues and points of tensions, it expresses our government’s intentions for future-oriented, friendly and cooperative relations between our two countries.”

On Tuesday, Lee also visited a memorial to Lee Soo-hyun, a Korean exchange student who died trying to save a Japanese man who fell onto the Tokyo train tracks in Tokyo in 2001, a figure symbolizing friendly ties between the two neighbors. Lee said as he paid respects, “Korea and Japan has a history of 1,500 years of exchanges, and in the words of former President Kim Dae-jung, we cannot let some 50 years of unfortunate history damage our 1,500 years of friendship and cooperation.”

On Wednesday, Lee is scheduled to meet with politicians including Natsuo Yamaguchi, leader of Komeito, the junior coalition partner of the ruling Liberal Democratic Party, and former Japanese Prime Minister Yoshiro Mori, president of the Tokyo 2020 Olympics organizing committee. He will also meet with Japanese college students the same day to discuss bilateral relations.

Just two days ahead of Lee’s visit, Korean First Vice Foreign Minister Cho Sei-young and Kim Jung-han, director-general for Asian and Pacific Affairs at the Foreign Ministry, on Sunday made an undisclosed day-trip to Tokyo, according to diplomatic sources. The JoongAng Ilbo reported Monday that Cho and Kim met with Japanese Foreign Ministry officials in Tokyo Sunday.

The visit comes just nine days after a visit to Seoul by Shigeki Takizaki, the Japanese Foreign Ministry’s new director-general of the Asian and Oceanian Affairs Bureau, on Oct. 16 for a meeting with Kim.

Japan in July implemented export restrictions on Korea impacting its semiconductor and display industries and further removed Korea from its so-called white list of favored trading partners the following month. Korea also removed Japan from a similar white list and decided to terminate the General Security of Military Information Agreement (Gsomia), its military intelligence-sharing pact with Japan signed in 2016 which had been automatically renewed annually. The Gsomia is set to expire in November.

Seoul previously proposed a joint fund comprised of voluntary contributions by companies of both countries to compensate the victims, a proposal instantly rejected by Tokyo.