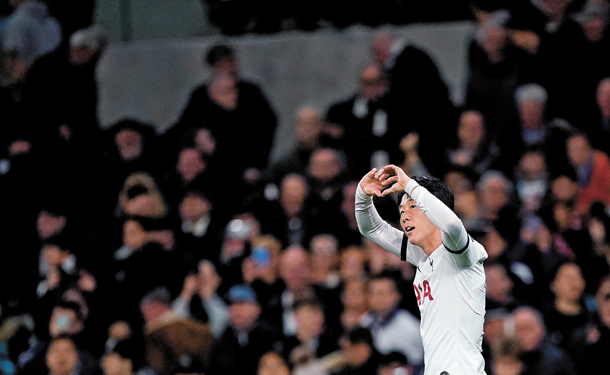 Son scored twice during the game against Crvena zvezda, a Serbian side also known as Red Star Belgrade, picking up his fourth and fifth goals of the season.

Harry Kane scored Spurs’ first goal of the match in the ninth minute. Son quickly extended the lead by scoring the second goal in the 16th minute, assisted by Eric Lamela. Before the end of the first half, Son added another in the 44th minute, this time assisted by Tanguy Ndombele, to extend Spurs’ lead to 3-0.

Spurs added two more in the second half of the match, picking up a big 5-0 victory against Crvena zvezda.

Son left the pitch in the 68th minute as Eric Dier was substituted on. Following the match, Son was given a score of 9.8 by whoscored.com, a football statistics website.

“The way how we play, how we perform and I think I’m more than happy to win this game,” Son told Spurs TV. “Early goal is always important. We were aggressive from the start and deserved a goal. After that, everyone got the confidence back and we played how we wanted to.”

With the win, Spurs are now ranked second in Group B with a win, a draw and a loss, totaling four points. Bayern Munich leads the group with three wins and no losses, totaling nine points.

Along with the victory, it was also a big day for Son’s personal stats. With two more goals, Son has now scored 121 throughout his football career in Europe, tying the record of former star player Cha. Throughout his career in the Bundesliga, Cha scored 121 goals, the most scored by any Korean football players in European football.

However, as Son isn’t planning to retire tomorrow, he is expected to exceed Cha’s record - probably in the next few weeks.

After a brief 2015-16 season with Bayern Leverkusen, in August 2015, Son signed a five-year contract with Spurs and joined the English Premier League. Son had the best season of his career during the 2016-17 season as he scored 21 goals. This was good enough to surpass Cha’s single-season record among Korean players, which was at 19.

Since then, Son has become one of Spurs’ star players. Although the 2019-20 season has only just started, Son is already off to a great start. In addition to tying Cha’s record, on Monday, Son was listed as one of 30 nominees for the Ballon d’Or Award, one of the world’s top football awards.

Son was the only Asian player to be added to the 30-player list this year, becoming only the third Korean player ever to be nominated.

Spurs will continue their season on Sunday with an English Premier League match against Liverpool at Anfield, starting at 4:30 p.m. local time, or 1:30 a.m. on Monday morning in Korea.