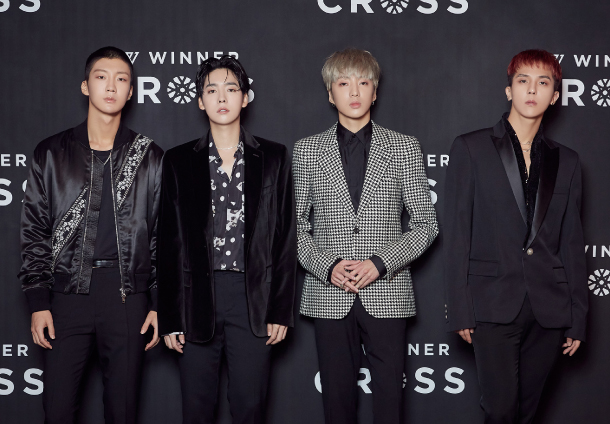 Boy band Winner pose for photos ahead of a press briefing held in southern Seoul on Wednesday for their new EP “Cross.” From left are Hoony, Jinu, Yoon and Mino. [YG ENTERTAINMENT]

On Wednesday, boy band Winner dropped their latest EP “Cross” and debuted a darker, more serious look than ever before.

Casual K-pop listeners who know the group for their upbeat hits like “Really Really” and “Millions” may be surprised to see the sudden change from the group, but for the four-member act known for their versatility, the new EP is a chance to show off a new side of themselves to their loyal fans, explained member Yoon during a press briefing on Wednesday in southern Seoul.

“We said in every interview that we wanted to change, but the changes we made in the past weren’t big enough for the public to notice it,” he said. “So we prepared for this album determined to makes changes in genre, lyrics, concept and visuals.”

And change they did bring. The music video for “SOSO,” the lead track off of the six-song EP, is easily the most visually shocking video the band have produced since their debut in 2014. Against a powerful hip-hop beat, cars are shown burning, crowds of people are blindfolded and member Hoony appears totally naked.

“As a celebrity I have a really fancy and glamorous image, but I’m lonely and hurt inside,” said Hoony, as he explained the scene in the video.

“I was actually supposed to wear underwear, but I wasn’t satisfied with the outcome so I just stripped in front of the camera. I wonder how many people besides me in the industry had this experience,” he laughed.

There’s a deeper meaning behind “SOSO” than just the visual shock.

“‘So-so’ is something that you answer to a question like ‘How are you doing?’ when you don’t want to show that you’re going through a difficult time,” said Yoon, who was involved in writing both the lyrics and music of the song.

“We tried to reflect that attitude in the music. The lyrics show us trying to act cool, but the tone changes as the song progresses, representing different inner emotions like indifference and anger.”

Given recent events that have beleaguered YG Entertainment, Winner’s agency, the group have plenty of troubling experiences to draw from when preparing “Cross.”

One of the biggest struggles for Winner was no doubt the resignation of the company’s founder Yang Hyun-suk. Previously part of a popular boy band himself, Yang had overseen a lot of the musical and creative direction of his artists before being caught up in a series of sex, drug and gambling scandals that brought him and other YG singers down.

“It would be a lie if we say we weren’t troubled [by the recent events],” said Yoon. “Now we don’t have many ways of getting feedback on our work, so for this EP, we had a long discussion amongst ourselves on whether the direction we were taking was right. But I think the situation also gave us an opportunity to show more of our personality.”

Not all of the tracks on “Cross” are dark and serious - Hoony’s solo track “Flamenco” takes inspiration from the traditional Spanish dance, while “OMG,” which Winner considered making the EP’s title track, has a playful chord progression and sends a thankful message to fans for their support.

The group said that they focused on maximizing the performances of the songs off of “Cross,” as the timing of the release coincides with the “Winner [Cross] Tour in Seoul” this Saturday and Sunday at Olympic Park, southern Seoul, where the band will perform new songs off their new EP.

Following the shows in Korea, the group will go on to perform in more cities across Asia including Taipei in Taiwan, Jakarta in Indonesia, Bangkok, Kuala Lumpur in Malaysia, Manila and Singapore.

“We’re very excited to go perform in Asia again, and we have worked hard to improve our English,” said Yoon. “We’ll also probably show our most impressive choreography to date.”

“We will all eventually have go to the military, but we hope to continue making music together even after,” he added, speaking on member Jinu’s upcoming military service that is set to begin next year.

“We plan on releasing a full-length album early next year. I hope people can look forward to that as well.”