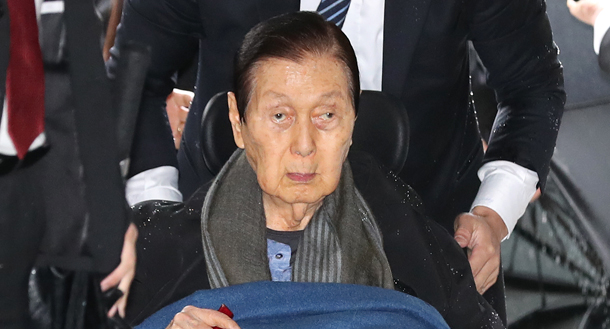 Prosecutors on Wednesday suspended the execution of a jail sentence of Lotte Group founder and honorary chairman Shin Kyuk-ho, citing his health problems.

The Seoul Central District Prosecutors’ Office said it has decided to halt the execution of Shin’s three-year prison sentence for six months in consideration of his deteriorating health conditions, including dementia.

The Supreme Court last Thursday sentenced 97-year-old Shin to three years in prison and a fine of 3 billion won ($2.55 million) after convicting him of embezzlement and breach of trust.

Shin was indicted in October 2016 on charges of evading gift taxes by handing over shares in Japan-based Lotte Holdings under a borrowed name to a firm owned by his relatives and providing 78 billion won worth of company deals to snack bars operated by them.

Following the top court’s guilty verdict, Shin’s lawyers asked for a stay of execution of his prison sentence, citing his health problems and old age. The lawyers argued that Shin’s life can be threatened while in prison, saying he is now fed minimally with liquid food supplements.

Last Friday, prosecutors, including one with a doctor’s license, visited Shin’s residence inside the Lotte Hotel in downtown Seoul and examined his health condition. Based on the on-site examinations, the Seoul Central District Prosecutors’ Office has finally decided to defer the execution of Shin’s imprisonment for a period of six months.

“It has been concluded that Shin is unfit for prison life as he can hardly communicate, eat and move by himself. In case of imprisonment, his health could deteriorate rapidly, leading to his death,” the prosecutors’ office said.

Under the current law, a stay of execution of a sentence can be permitted for a maximum of six months for seven grave reasons, including life-threatening health problems, and has to be renewed every six months.

Prosecutors demanded that Shin’s residence be restricted to the Lotte Hotel and hospital. Shin has been staying on the 34th floor of the Lotte Hotel in downtown Seoul since June this year.