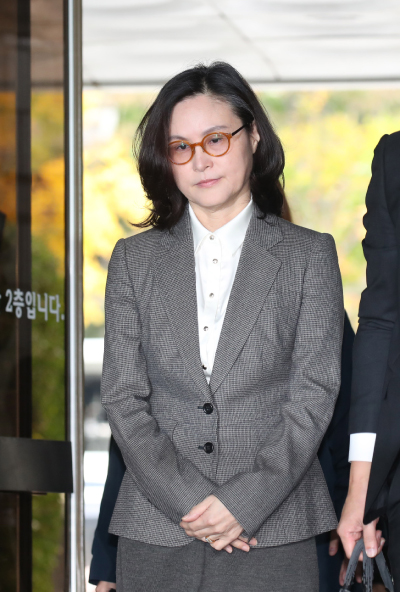 After putting the wife of former Justice Minister Cho Kuk behind bars on Thursday, the prosecution is zeroing in on Cho - a key political ally of President Moon Jae-in - in its investigation into corruption allegations surrounding his family.

The prosecution took Chung Kyung-sim, Cho’s wife and a professor from Dongyang University, into custody on Thursday, 58 days after it started the investigation on Aug. 27 with simultaneous raids at 30 locations.

Following a nearly seven-hour-long warrant hearing on Wednesday, Judge Song Gyeong-ho of the Seoul Central District Court granted the warrant for Chung’s pretrial detention, concluding that prosecutors have enough reason to arrest her.

“The prosecution substantiated most of the charges against her,” Song said. “The progress of the investigation so far also showed that there is a risk of evidence destruction.”

Chung, who was waiting for the ruling at the Seoul Detention Center, was put behind bars immediately after the decision. She is the second person to be detained in the scandal surrounding Cho, who lasted as justice minister for 35 days, and his family.

In its application for the detention warrant, the prosecutors from the Anti-Corruption Investigation Department II of the Seoul Central District Prosecutors’ Office listed 11 charges, mainly concerning her suspected roles in forging academic career records to help her daughter’s admission to medical school, making illegal financial investments and destroying evidence.

At the hearing, Chung and her lawyers reportedly denied most of the charges. They also cited her poor health to challenge the prosecution’s attempt to jail her. “A family is about to be wrecked,” Kim Chil-jun, one of Chung’s lawyers, said after the hearing. “To guarantee her right to defend herself, she should be investigated without detention.”

Song, however, concluded that the prosecution has enough grounds to hold her for further investigations.

Insiders of the legal community said Cho, former minister of justice and a law professor of Seoul National University, will soon be summoned for questioning. They said prosecutors will likely question him before their detention warrant for Chung expires in 20 days.

“It goes against common sense that a husband did not know his wife’s dealings of money over 1 billion won [$852,878], unless their family wealth is astronomical,” said a lawyer who used to be a prosecutor in charge of high-profile criminal investigations. “The prosecution’s investigation into Cho will pick up speed after Chung is detained.”

Another lawyer, who was a former head of a district prosecutor’s office, said the prosecution would not have started the probe unless it has strong suspicions against Cho. “Prosecutor General Yoon Seok-youl must have decided to pursue the case because there were strong enough suspicions against Cho,” he said.

Of the 11 charges against Chung, the prosecution believe that Cho was involved in or had knowledge of at least four.

The prosecution is particularly paying attention to Cho’s suspected involvement in Chung’s unlawful investments in a Kosdaq-listed company, WFM. Chung was suspected of using insider information to purchase stocks of WFM, which operates battery and education businesses, and concealing the profit generated by the alleged financial crime.

She was also suspected of having ordered her personal asset manager Kim Gyeong-rok to destroy evidence and forge documents to disguise the investment as lawful.

According to sources informed about the investigation, some of the money Chung used to buy WFM shares originated from Cho’s bank account, effectively tying him to the scandal.

Sources from the prosecution said the Anti-Corruption Investigation Department II of the Seoul Central District Prosecutors’ Office is considering summoning Cho sometime next week. The prosecution is expected to ask him if he was involved in the stock trade or if he had any knowledge of his wife’s alleged crimes.

Cho has denied his involvement in the stock purchase. “I have never purchased WFM stocks,” Cho told the JoongAng Ilbo on Wednesday.

“They will likely question Chung for a couple more rounds to take statements,” said a prosecutor. “Cho, then, will likely be summoned before Chung’s detention warrant expires in 20 days, in order to make the couple stand trial together.”

Chung was suspected of using her younger brother’s name to make the investment using insider information and concealing the profits. During its search and seizure operation of the younger brother’s home in Ilsan, Gyeonggi, early last month, the prosecution secured certificates of 120,000 WFM shares. A private equity fund invested by Chung, Co-link PE, took over the management rights of WFM in October 2017.

Chung paid 600 million won for 120,000 WFM shares - 5,000 won per share - through an over-the-counter trade in 2018. At the time, the stock price of WFM was 7,000 won. Cho will face a bribery charge if the connection between his job at the Blue House and Chung’s stock investment is proven.

When the stock purchase was made in 2018, Cho was serving as the senior presidential secretary for civil affairs at the Blue House. Under the Public Service Ethics Act, both Cho and his spouse Chung are prevented from making direct stock investments.

Cho is also expected to be investigated about his children’s academic fraud allegations. Cho’s daughter and son were suspected of having received fake internship certificates from the Center for Public Interests and Human Rights Law of Seoul National University, of which Cho was an operator at the time.

The ruling Democratic Party and the Blue House, which eagerly defended Cho and his initiative to weaken the prosecution’s powers, remained tight-lipped Thursday. While Blue House aides refused to comment on Chung’s detention, Rep. Lee In-young, floor leader of the ruling party, said, “Our party respects the court’s decision. We believe the truth will be laid bare through a trial.”

The main opposition Liberty Korea Party welcomed the court’s decision. “Chung deserves to be detained for an investigation, taking into account her clear attempts to destroy evidence,” said Kim Myung-yeon, chief spokesman of the party.

“Now is the time for Cho, a co-conspirator, to face an investigation,” Kim said. “The prosecution must conduct a thorough and severe investigation into the Cho family, who were even protected by the president, to demonstrate equality before the law.”

Meanwhile, the Inspections Headquarters of the Supreme Prosecutors’ Office, which investigates suspected law breaking and professional misconduct attributed to prosecutors, announced Thursday a reform plan to strengthen its internal affairs investigations. During the announcement of the plan, a senior prosecutor in charge of inspections said the team investigating Cho’s family will face an audit if suspicions are raised about the investigators’ rights violations.

Han Dong-soo, head of the Inspections Headquarters of the Supreme Prosecutors’ Office, announced the reform plan, following President Moon’s order on Oct. 16 that the prosecution strengthen its internal affairs investigations. Shortly before his resignation on Oct. 14, Cho recommended Han as the chief inspector, and Han was appointed later that week.

Han announced five changes on Thursday, and one of the plans is recruiting auditors from the police, National Tax Service and Board of Audit and Inspection in order to improve transparency.

Han also promised meticulous audits on possible human rights violations committed by prosecutors during questioning and raids. Asked about a possible plan to inspect the team investigating Cho’s family, amid complaints from ruling party politicians about human rights violations, Han first said, “It is inappropriate for me to reply because a trial and an investigation are both still ongoing.”

He, however, added that an audit is possible after the probe is concluded. “If new evidence [of rights violations] is raised, I believe we can exercise the right to audit the team,” he said.

Last month, Prime Minister Lee Nak-yon complained about the prosecution’s way of investigating the Chos. “It is extremely lamentable if the prosecution was repeating its old habits of leaking criminal charges against suspects and committing human rights violations and defamations during investigations,” Lee said on Sept. 5 during a National Assembly session.

Following Han’s announcement on Thursday, members of the legal community said the new measure will put a serious damper on prosecutors.

“An investigation inevitably accompanies ‘lawful violation of human rights,’” said a prosecutor-turned lawyer. “Will all prosecutors have to undergo audits if suspects unilaterally raise issues? First of all, it will throw cold water on the investigation into Cho.”