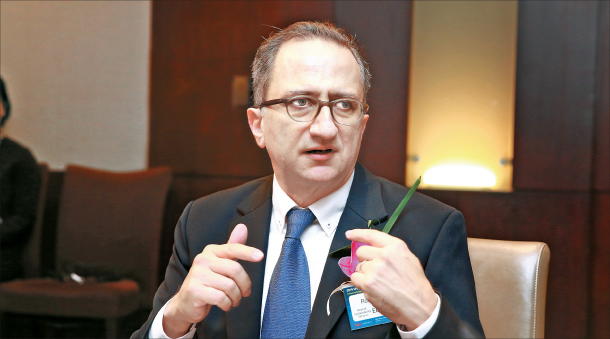 With growing interest in corporate accountability and social responsibility, sustainability has emerged as a key focus for many businesses.

The Dow Jones Sustainability Index (DJSI), developed by S&P Dow Jones Indices and RobecoSAM, assesses how well businesses commit to the concept by gauging their progress in environmental, social and corporate governance (ESG).

RobecoSAM Managing Director Edoardo Gai explained why the concept is crucial for businesses and discussed the latest trends in Korea during an interview at the Dow Jones Sustainability Index 2019 Conference in Korea on Oct. 22.

“In many parts of the world, it is no longer accepted that a company only thinks about making a profit without considering the externalities they create to society,” said Gai, highlighting the impact companies have on society. “Sustainability should not be seen as a cost.”

“If [sustainability] is done in a smart way, it can bring more benefits to the company - a better reputation, additional revenues, better relations with the regulator and with clients and more motivated employees,” he continued.

“This can range from social to environmental issues.”

The DJSI considers many aspects of a business when evaluating it, such as social responsibility, environmental policies and employee relations.

Committing to the concept pays off.

The three-year return for the Korean version of the index outperformed the benchmark Kospi by 2.5 percentage points as of Oct. 24.

“Korea was an early adopter of sustainability,” the expert explained, noting the DJSI Korea created 10 years ago.

Korea was the first country in the region with its own DJSI index.

Among the total 204 local companies assessed for the local index this year, 40 companies, such as LG Electronics and Lotte Chemical, were included in DJSI Korea.

Despite the decade-long interest from Korean companies in the index, they may be losing the initial edge, according to Gai.

“We have seen that the advantage the Korean companies had over the world is diminishing,” said Gai, who also serves as RobecoSAM’s Head of Sustainability Services. “I hope that Korea will continue to lead in the future, but for this they need an extra effort.”

Korean companies have an unusually high incidence of corruption, bribery and fraud.

“Concentration of such cases in Korea doesn’t propagate a reliable image of Korean companies,” he explained.

“It is important that Korean companies enforce their policy to behave to increase trust from investors.”

According to the Korea Productivity Center, which co-developed the Korean version of DJSI, the gap between Korean and global companies has widened this year.

Gai added that there are also more basic transparency problems faced by foreign investors when dealing with Korean companies.

“Considering that the ESG is being integrated into investment processes worldwide, I think it’s important for companies to be more transparent in English for foreign investors to have all the information they need,” he said.

Interest in the index has recently grown from businesses, according to Gai.

“The number of companies participating in our questionnaire has grown by over 17 percent [this year], which is very similar to the growth of the United Nations principles of responsible investment signatories,” he explained. “We think that we have come to a point where the interest from corporations is rapidly growing symmetrically.”

The global version of the index this year had 318 of the most sustainable global firms after assessing the top 2,526 companies around the world.

“With increasing interest from asset owners and asset managers, there is a need for a specific index to satisfy the needs of the different clients.”

Gai added that in an age of trade wars and creeping protectionism, sustainability is all the more important.

“If there are trade conflicts, all companies are affected the same,” he said. “But if it’s possible for a company to demonstrate that it is a sustainable and responsible player, it might support their relationship with the government because they will see that they are bringing value to the society at large.”