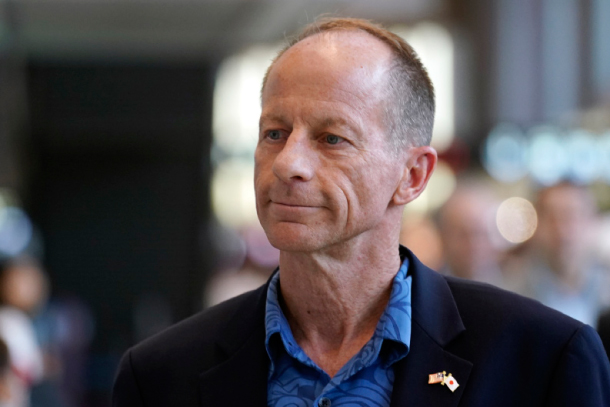 David Stilwell, U.S. assistant secretary of state for East Asian and Pacific affairs, urged Korea and Japan to move past differences which led to Seoul withdrawing from the intelligence-sharing pact with Tokyo.

At a press conference in Tokyo Saturday, Stilwell said that the General Security of Military Information Agreement (Gsomia), set to expire in less than a month, is “beneficial” to both Seoul and Tokyo, and encouraged Korea to reconsider its decision to withdraw from the pact.

“The United States will continue to encourage these two critical allies to resolve bilateral frictions,” Stilwell was quoted as telling reporters in Tokyo by the Nikkei Asian Review, as tensions between Korea and Japan remain over history and trade matters.

Washington can “bring the two sides together and encourage both to take a larger view of this issue,” added Stilwell. “This is a security issue that affects all three of us.”

He likewise encouraged “both sides to find creative solutions” to ease friction.

Korea on Aug. 22 opted to terminate the Gsomia with Japan, signed in November 2016 and renewed automatically each year unless either country withdraws, with 90 days advanced notice.

The intelligence-sharing pact is set to expire in less than a month, at midnight on Nov. 22. Washington, which has a separate trilateral military information-sharing deal with Seoul and Tokyo, has expressed disappointment and concern over the termination of the bilateral Gsomia, often used to share information on North Korea’s missile testing.

Stilwell is on a six-country trip, which started last Thursday and runs through Nov. 7. It also takes him to Yangon, Myanmar; Kuala Lumpur, Malaysia; Bangkok; Seoul and Beijing. He last visited Seoul in mid-July, right after the announcement of Japan’s export restrictions.

Korean Prime Minister Lee Nak-yon and Japanese Prime Minister Shinzo Abe met in Tokyo Thursday, the highest-level meeting between the two countries since the forced labor court decision last October, and agreed on the importance of not neglecting relations and of continuing dialogue. However, the two sides were not able to further narrow differences on the key issues straining relations between the two countries.

“The Gsomia issue fundamentally was triggered by Japan’s unfair export restrictions,” Korean Foreign Minister Kang Kyung-wha said in a press conference Thursday. She noted that the issue “hasn’t thus far been a topic of in-depth discussion” between the two countries.

“Without a change in [Japan’s] retaliatory measures, it will be difficult to withdraw the Gsomia decision,” a senior Korean Foreign Ministry official told reporters in Seoul Friday, adding this will neither be logical nor acceptable to the Korean people.

However, the official pointed out it will be difficult to reach an agreement in less than a month as Japan is demanding that forced labor issues be resolved before export restrictions are lifted.

Japan claims that the 1965 treaty normalizing relations with Korea, which provided for an economic cooperation fund, settled all compensation matters, while Seoul maintains it cannot interfere in court rulings, citing separation of powers.

Hiroshi Kajiyama, the new Japanese minister of economy, trade and industry, insisted Saturday in his first press conference that the trade restrictions “did not violate” World Trade Organization (WTO) regulations. His remarks indicate that Japan is not planning to budge from its implementation of export restrictions on Korea.

Seoul in September filed a complaint with the WTO over Tokyo’s export restrictions.

Kajiyama, who previously served as minister in charge of revitalizing local economies, was named by Abe to take over the Trade Ministry, which spearheads the export restrictions. Isshu Sugawara, former trade minister, resigned Friday after just 44 days following accusations of election law violations.