Moon goes all in on AI for future opportunities

Moon goes all in on AI for future opportunities 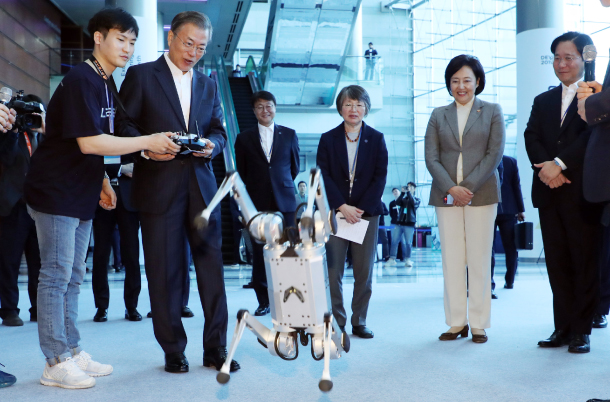 President Moon Jae-in, second from left, controls a “Mini Cheetah” robot at the Naver Deview 2019 conference Monday in Gangnam District, southern Seoul. Developed by Naver Labs and a team of robotics researchers at Harvard University, the four-legged robot can run, trot, jump and even do a backflip. [YONHAP]

President Moon Jae-in promised a government drive to promote artificial intelligence (AI) technology on Monday, adding that a “national AI strategy” will be rolled out this year.

An expanded budget of 1.7 trillion won ($1.45 billion) and regulatory reforms were part of Moon’s promises.

Moon made a surprise appearance at Naver’s Deview 2019 conference held Monday in Gangnam District, southern Seoul. An annual event where Naver’s executives share their tech achievements, Deview is one of Korea’s largest conferences for AI experts and developers.

“Artificial intelligence is not simply an achievement in science and tech - it’s a new civilization (…) a partner of mankind,” Moon said during a keynote speech.

“[Korea] is not an AI pioneer, nor is our technology globally top class (…) but we have experience leading an internet revolution amid a currency crisis, competence in manufacturing, ICT infrastructure and abundant data of an e-government,” he added.

Moon pledged to create a business environment favorable for developers and AI start-ups.

On regulations, he promised a shift to a “negative” regulatory framework that allows start-ups to engage in businesses that are not specifically prohibited by law.

Korean startups have long complained about the country’s “positive” regulatory framework - in which companies can only do what’s specifically permitted by law, thus blocking businesses in legal “gray zones.”

The government will also push for AI-related departments in local universities - a response to complaints that Korea lacks AI experts - and lower the bar to allow professors to take up positions at private companies.

As for financial support, government budgets will be pumped into backing start-ups, public investment in cutting-edge technology like AI chips and providing cloud computing infrastructure to local companies, schools and labs. According to Moon, the administration’s budget for 2020 expanded funding for AI, data and 5G networks by 50 percent on year to 1.7 trillion won.

“In an era of artificial intelligence, data and cloud computing are a must,” he said. “The government will seek fundamental changes in constructing a database, opening access and using it.” The president also pledged to push for reforms of data laws to expand access to the private sector within this year.

Another goal Moon proposed was the transformation into an “AI government,” meaning AI technology will be incorporated in the government’s systems. Public administration services will be shifted to the internet.

Artificial intelligence was the field that SoftBank founder and CEO Masayoshi Son stressed to Moon during a meeting last July.

Son advised that Korea’s “first, second and third” focus should be AI technology, for which massive investments will lead to larger revenues and job creation.

Moon has been ramping up visits lately to business operations of Korea’s major companies. This month alone, the president made appearances at Samsung Display’s Asan factory in South Chungcheong and Hyundai Motor Group’s Namyang Technological Research Center in Gyeonggi.