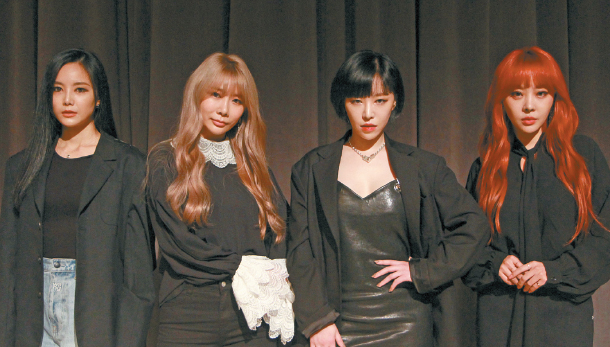 Brown Eyed Girls met with local press on Monday afternoon prior to the release of their new full-length album, “RE_vive,” the group’s first release in four years. From left are members Miryo, JeA, Gain and Narsha. [MYSTIC STORIES]


Prepare to be surprised when listening to Brown Eyed Girls’ latest album. The group is back for the first time in four years with their renditions of 10 classic hits from the history of Korean pop music. All of the tracks on their full-length album “RE_vive” are remakes of songs from the past - something that fans didn’t see coming - and turned out to be more difficult than expected.

“With a new song, we get guide vocals,” said member Gain. “But to have a complete song, it was really hard to reinterpret every part of that and make it ours. The recording was especially hard because we kept sounding similar to the original voices. We had to work really hard.”

The task was no joke, especially with “Abandoned” - one of the two lead tracks, along with “Wonder Woman.” Since the song’s original singer Jung Jae-hyung has a very distinct voice, the challenge for members was to keep his voice out of their heads in the process.

“We were dying along the way,” said member JeA. “It was an immense pressure not just for us but also the members of the staff. We really didn’t realize it would be this hard from the very beginning. But now that it’s out, it’s very fulfilling.”

Member Miryo added, “We’ve been talking about this for a long time, and we started working on it two years ago.”

If for “Abandoned” the members had to pull out all of their vocal powers to lead a deep ballad track with minimal instruments, the music video for “Wonder Woman” - originally sung by Cho Won-sun - arouses a visual shock that is perhaps even larger than the song itself.

In the videos, the four members of Brown Eyed Girls are clad in black tuxedos and stand surrounded by drag performers clad in white wedding dresses - a reversal of traditional gender roles that is sure to shock some viewers.

“Many of the drag queens that are featured in the music video are doing so much, especially performances,” said member Narsha. “It was really hard to coordinate with them, but many of them canceled their scheduled events and made time for us. Honestly, I think they are the main characters of the music video - we’re there to support them.”

“We focused so much more than we have ever done in the past,” she said. “We realized that we had to feel some sort of responsibility while making this album. We’re not being cocky, but we do feel confident.”