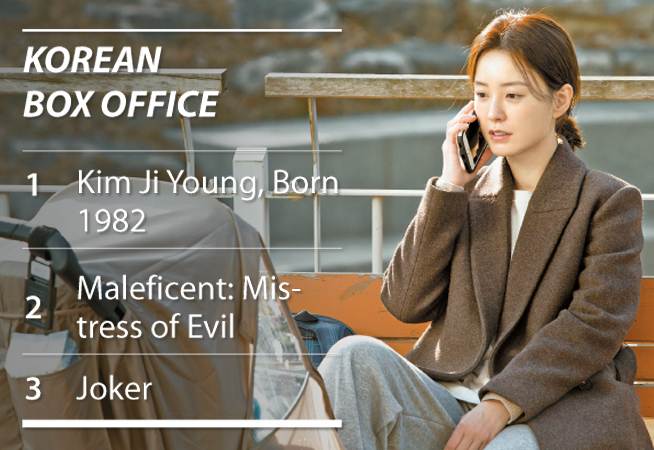 “Kim Ji Young, Born 1982” debuted atop the local box office, selling over 1.1 million tickets on its first week despite backlash from misogynists who criticized the film before its release. [LOTTE ENTERTAINMENT]

Despite a mixed response, “Kim Ji Young, Born 1982” soared straight to the top of the box office in its opening weekend.

The controversial film found a great deal of support in its debut, drawing 830,000 moviegoers to 1,486 screens. Based on the best-selling novel of the same title, audiences praised Jung Yu-mi’s performance, which struck a chord with many Korean women who have either witnessed or experienced at least one of Ji-young’s encounters in contemporary society.

Both the novel and the film raise sensitive issues of gender disparity through Ji-young’s anecdotes and in return received contradicting responses of both support and criticism. Despite the backlash, the film still managed to surpass a million ticket sales in its first five days in theaters.

Overseas film distribution buyers also praised the actors’ realistic portrayals of the characters, and the film has already sold its distribution rights to 37 territories.

Due to the success of “Kim Ji Young, Born 1982,” the rest of the top films in theaters all dropped in box-office rankings. Angelina Jolie’s “Maleficent: Mistress of Evil” fell to second place, selling 325,000 tickets for 880 screenings.

Joaquin Phoenix’s “Joker” also slid down one spot and landed in third place, as it sold 240,000 tickets at 702 screenings. Excitement over “Joker” seems to be dying down, at least at the local box office. Nevertheless, it looks like the film will likely surpass 5 million ticket sales - as of this Sunday, 4.96 million tickets have been sold domestically.

“Crazy Romance” took the fourth place spot over the weekend, attracting 130,000 moviegoers to 613 screens. Although the local rom-com never topped the box office due to it being released the same week as “Joker,” the film has still fared well, totaling up to almost 2.8 million ticket sales.

Hollywood action film “Rambo: Last Blood” finished the weekend in fifth place, selling 47,000 tickets for 483 screenings, despite it being the film’s first week in the local box office. The movie is the fifth installment of the “Rambo” series, centering around the battered war veteran. Unlike the previous films, which put the main character in various overseas locations to complete his missions, the fifth movie begins with Rambo living peacefully at his deceased father’s horse ranch with his old friend Maria Beltran and her granddaughter, Gabriela. Feeling that Gabriela is the granddaughter that he never had the chance to have, the two form a familial bond. So, Rambo must come to the rescue when Gabriela is drugged and kidnapped by a Mexican cartel while she is in Mexico in search of her biological father.