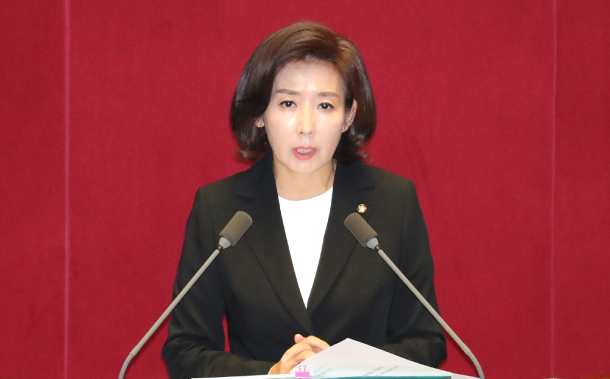 Rep. Na Kyung-won, floor leader of the main opposition Liberty Korea Party (LKP), slammed President Moon Jae-in and his administration on Tuesday during a speech at the National Assembly, saying that the ongoing anti-Moon protests could grow into a “revolution” if the president continues to ignore the calls of his critics.

There are currently three negotiating bodies: the LKP, the ruling Democratic Party and the minor-right Bareunmirae Party.

The LKP floor leader continued that she “lacked assurance” to “constitutionally respect” Moon as the president of the country and blamed him for “dividing” the nation by the appointment of his aide, Cho Kuk, as justice minister. Cho, who verbally attacked others with “scathing words” before he became the justice minister, turned out to be “a far uglier greedy leftist,” Na said.

Na also denounced Moon’s economic policies, saying his income-led growth policy has led people to lose their jobs and money, while the government’s “rash” intervention in the economy has caused the market to lose vitality.

On national defense and diplomacy, Na urged the Blue House to renew the bilateral intelligence-sharing pact with Tokyo, the General Security of Military Information Agreement (Gsomia), and revive and normalize major combined military exercises with the United States, the last of which was suspended during denuclearization talks with North Korea.

For education, Na urged the ruling Democratic Party (DP) to cooperate with the LKP to increase the ratio of students chosen predominantly by their standardized scores on the College Scholastic Ability Test in college admissions, saying it has been the party’s policy to raise the bar to 50 percent or above for universities.

Na’s speech at the National Assembly in Yeouido, western Seoul, was made a day after Rep. Lee In-young, floor leader of the ruling DP, gave his, in which he promised to “fulfill” prosecutorial reform and pressed the need to establish a special agency to probe high-level government officials, which the LKP is against.

In his speech, Lee stressed a “fair society” and a “co-existing economy,” reiterating the policies of the Moon Blue House. Rep. Oh Shin-hwan, floor leader of the Bareunmirae Party, is planned to present his speech at the National Assembly today.