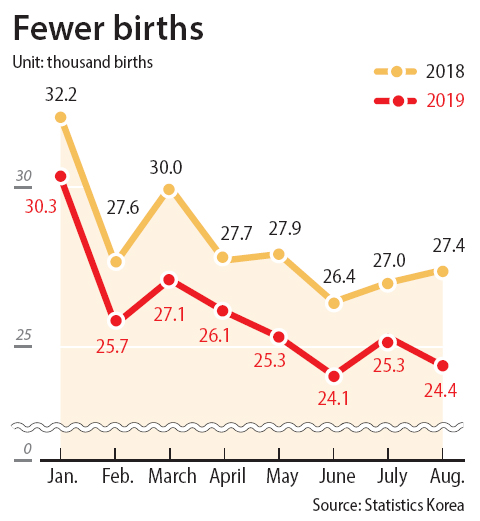 According to Statistics Korea data released Wednesday, the figure was down 10.9 percent from the previous year. Korea has posted record lows for births for each month since April 2016.

The total number of births this year through August stood at 208,195, an 8.0 percent drop from the same period a year earlier.

Busan experienced the steepest fall in births through August compared to the previous year, dropping by 12.5 percent.

Births through August fell across all cities and provinces, except Sejong, where totals were up 5.9 percent from the previous year. The 208 births in August in the relatively young city, however, represent just 1 percent of the country’s total that month.

The low number of births suggests a demographic collapse.

According to Statistics Korea, the country’s total fertility rate last year was 0.98, a decline from 1.05 in 2017 and the lowest rate since the related data were first compiled in 1970.

It is the lowest fertility rate in the world.

The agency expects Korea to make the transition into a “super-aged” society as early as 2025.