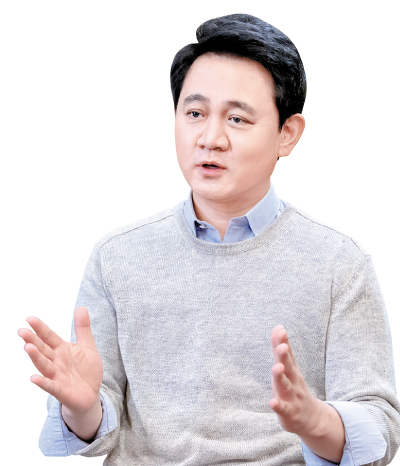 Netmarble’s acquisition of Woongjin Coway earlier this month was a surprising move given that the companies are in such different businesses: a game maker and an old-school appliance leasing company.

Bang Jun-hyuk, chairman of Netmarble, however, says the decision is in line with the recent trend in the IT industry. The new focus, according to Bang, is offering customized services by analyzing vast amounts of collected data.

Bang is a first-generation pioneer of Korea’s IT industry who started Netmarble with 100 million ($86,000) won of capital and eight employees when he was 32 years old.

Bang was able to innovate whenever the company faced a crisis.

The JoongAng Ilbo met with Bang on Oct. 23 at Netmarble’s headquarters in Guro District, western Seoul. He shared his thoughts on the recent acquisition and changing trends in the IT industry.

According to Bang, who himself has been a longtime user of Coway’s air and water purifiers, the decision to acquire the home appliance rental company is an attempt to use big data in a smart way.

“As the world shifts to smart IT from convenient IT, the possibility for using game technology is endless,” Bang said. “Gaming companies, which have been analyzing tons of data from tens of millions of users and developing technology required for the analysis, have actually developed technology needed for smart IT where data and AI are crucial.”

Much like Google and Amazon creating various business models by tapping technology for different uses, the combination of Coway’s subscription-based business model and Netmarble’s gaming technology will create intangible synergies, according to Bang.

Netmarble has been working to bolster AI technology by establishing an AI-dedicated center in 2014. Some one hundred developers are working on upgrading technology used in games.

“Game technology, which provides optimized services to each user by analyzing their playing time, preferred content and transaction patterns, can take the reins of the rapidly-expanding smart home market,” said Bang. “Technology leads the business.”

Bang had actually sold his company to CJ Group in 2006 due to worsening health. He, however, was asked to take charge of the company again in 2011.

While he was away for five years, Netmarble developed 19 games and introduced 11 to the market, but every single one of them failed to gain traction.

All of his family and close acquaintances were opposed to his comeback. But Bang decided to get back in the game. The plan was transitioning Netmarble into a “mobile gaming company” from a PC game developer.

“My return might be against my reasonable, realistic and logical judgment, but business opportunity hinges on whether you can overcome that judgment and bring innovation,” said Bang.

“The chances were slim, but I was confident that I could facilitate innovation with a new growth engine, which is mobile,” said Bang.

Bang wasn’t always the game changer. He had to face his own failures when he was younger to learn how to overcome difficulties.

After dropping out of high school, he founded his own company in 1998 at the age of 30 after 10 years as an average office worker. His company provided a service similar to Netflix called CinePark, an online movie streaming service where users could watch a movie for 500 won.

The following year, Bang started a business similar to SkyLife called Sky Cinema, a satellite internet broadcasting service. However, the business collapsed in one year due to financial difficulties.

“I spent 10 years as an office worker to learn how business works. The previous two failures were ‘good failures’ where I didn’t lose the trust of my investors and my colleagues. The trust was kept intact because I risked everything for the success of the business, not for my success, and because I told everything to my investors and colleagues with honesty,” said Bang.

For those who want to start a new business, Bang emphasizes preparation. Though starting a new business has become more common than before, with more institutions providing support and with overflowing amounts of capital, it’s the “desire” that decides success or failure.

In his 2015 New Year address, Bang said, “My age stopped at 39.” When asked about whether he still places 39 candles on his birthday cake, he said, “Yes.”

“If I do not stay awake and remind myself in this way, I might rationalize everything with just being old,” said Bang.

“My interest these days is reminding myself of elements that can only be found in young people: passion, a flexible attitude toward change and a positive mind set.”