Now the police can prevent riots and pollution

Now the police can prevent riots and pollution 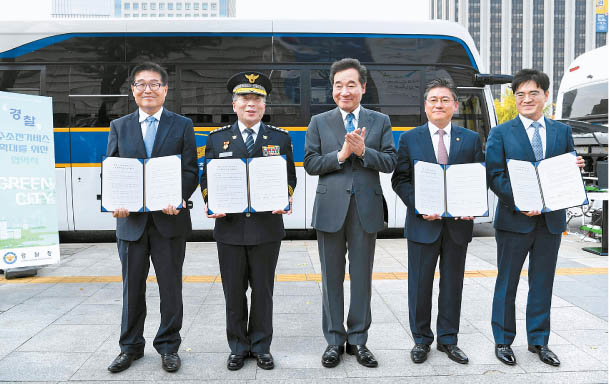 Riot police in Seoul will now keep the peace and save the planet with the introduction of hydrogen-powered buses to move officers and cut down on emissions.

The delivery comes after President Moon Jae-in vowed in June to accelerate the adoption of hydrogen-powered vehicles by replacing all 802 police buses with hydrogen vehicles by 2028.

An official at the National Police Agency explained that the two vehicles will likely transport riot police stationed in Gwanghwamun and near the National Assembly in Yeouido, western Seoul.

The automaker also signed a memorandum of understanding with the police agency, the Ministry of Trade, Industry and Energy and the Ministry of Environment during the event to expand the use of hydrogen buses by the police.

Hyundai Motor plans to provide two additional buses to the police by the end of this year that will reach speeds higher than the recently delivered buses.

The improved bus will have two fuel-cell stacks used in the automaker’s flagship fuel-cell electric vehicle Nexo and will be installed with a hydrogen tank on its roof.

Hyundai Motor will monitor data from the vehicles and plans to use the data to meet a full-scale production deadline of 2021.

“We will continue to work on improving performance before production based on acquired vehicle data,” said a spokesperson at Hyundai Motor. “We will consider the special needs of police buses, which have a lot of waiting time in urban areas.”

Police buses have often been pointed out as culprits for urban pollution as their engines are often left idle to run heating or air conditioning inside the bus during hot or cold weather.

According to the Trade Ministry, the National Police Agency plans to purchase two additional hydrogen buses next year and start to replace existing buses from 2021.

The agency is also planning to develop fuel-cell electric patrol cars by 2020 and put them into operation by 2021.

Under Korea’s plan to overhaul its auto sector to renewable sources of energy, it aims to establish 660 hydrogen charging stations by 2030 and expects the share of electric- and hydrogen-powered cars in the country to rise to 33 percent of new vehicle sales by 2030, up from only 2.6 percent this year.