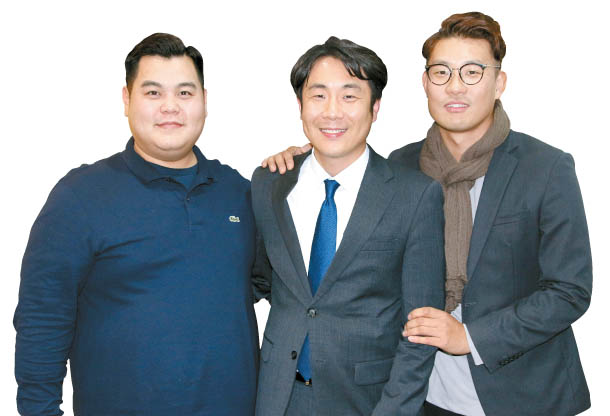 From left, Jeon Jong-wan, Lee Seung-hyeon and director Park Ju-hwan pose for photos at a press conference for their film “Graduation.” The three were the former presidents and vice president of the student council in 2010, 2012 and 2015. The film is scheduled to hit theaters on Nov. 7. [CINEMADAL]

The impeachment of former president Park Geun-hye will forever be remembered by the weeks of candlelight protests held in Gwanghwamun Square in central Seoul which reflected Korean citizens’ outrage. From the revelation of Chung Yoo-ra’s special treatment at Ewha Womans University, a route traced upwards to unveil a series of political scandals that brought down the corrupt president.

Before that incident broke out, there were smaller, but equally as fierce protests being held by students at Sangji University against former university chairman, Kim Moon-gi, and his aides for 10 years. Kim had been chairman of the school board in the 1990s, but had to resign his post after he was arrested on corruption charges in 1993. He returned to the school as the university president in August 2014.

In 2009, Park Ju-hwan was an average student at Sangji University taking a break from school for a year to figure out what he wanted to do with his life. When another friend showed him a YouTube clip of fellow student Lee Seung-hyeon sobbing and refusing to sit out of a protest, he suddenly felt ashamed for resting while Lee was out in the streets protesting Kim’s possible return.

That was the beginning of the 10-year journey Park would take with his fellow students to drive out Kim and his corrupt board of trustees. Park recorded everything with his camera, and he eventually turned the footage into the documentary film “Graduation.”

In the film, the struggles that the students face can be felt vividly by the unstable and often violent shaking of the camera angles, as the protesting students get shoved by Kim’s aides. Viewers are able to experience the painstaking process and sufferings the students had to endure to make their voices heard.

The three former student council leaders - Park, Jeon Jong-wan and Lee - each said that they never once regretted their decision to be at the front and center of the fight, despite what they had to go through to achieve their goal.

“We had a choice,” Lee said. “Whether to remain spectators and ignore the situation, or jump in. We chose the latter, and we made that choice willingly.”

The three main characters of the film recently sat down with the Korea JoongAng Daily for an interview at a cafe at central Seoul to discuss the winding path that they took in their fight against their school’s former president. The following are edited excerpts from the interview. 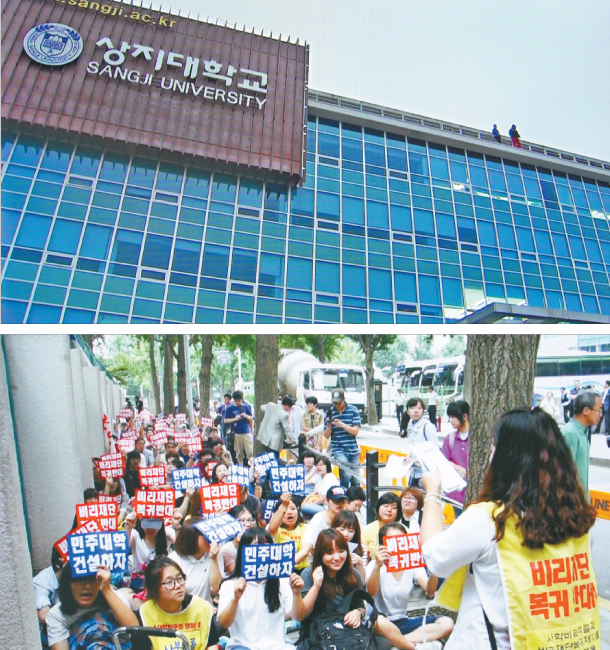 Scenes from the film. At top, a building at Sangji University with the school logo that Kim Moon-gi created when he was president. Above, students from Sangji University stage a sit-in protest in Seoul to object the return of Kim to the school. [CINEMADAL]

Q. The position of being a leader of the student body and the atmosphere at Sangji University changed drastically after Kim became the president. Can you describe how was it different?

A. Park: [When I was a student], I personally felt that we were fighting against a ghost. We never actually saw him or heard his voice, only heard of his notorious deeds from older students and his past records, but that still didn’t really reach us. That also became one of the reasons why I thought I should make a film about this, so that I can actually show people what this person did to the students and how he messed up the school.

We only had a just cause to fight against Kim, which was the hardest part, because we couldn’t actually experience it. [Based on his previous acts] he was the kind of person who thought of the school as his personal property. And that was how I persuaded other students to fight alongside us. But I think the fight was more difficult for Jeon, who actually experienced the authoritarian rule.

Jeon: If Park felt like he was fighting a ghost and the student body leaders had to persuade the rest of the students, our fight came from a deep rage that was accumulated from the bottom when the students felt that the entire school was falling apart.

Actually, after Kim became the president, at first things were quiet for a while because a lot of the students still had a glimmer of hope that things could be resolved peacefully. But the reality sunk in when the school continued to delay the students’ demands and neglected us to the point that their disregard infringed on our own basic learning rights. For instance, the toilets were broken and sewage was leaking out, but they weren’t fixed. Lights were going out, but since they weren’t changed, we had to study in a dark classroom. When it snowed, we had to plow snow off of the roads, but we couldn’t even do that because the school didn’t have the money to buy salt. So students who got injured while walking on the slippery roads were going to the hospital. There were even car accidents.

What was the hardest part of being a leader and being involved in this fight?

Park: For the last 10 years, we haven’t really had a proper election to choose the student body president. [The position] was offered to those who could endure it. All of us knew that the leaders would be the ones going through the mill as the representative of the students - the countless lawsuits, shaving our heads, going on hunger strikes, etc.

Before the protest began, many of us didn’t expect that we would have to go to such extremes for a decent conversation with the board. We realized how society can destroy humanity […] I personally still have trauma from the protests.

Jeon: The hardest part was failing my friends and the students who trusted in me. I became the student body president in 2015 believing that I could keep my promise of normalizing the school by the end of my term. But even after Kim was dismissed from the position, his influence was still felt through suspensions and lawsuits the student body members were receiving. So I couldn’t finish what I was so determined to finish, and I felt like I failed the students because the school still wasn’t back to normal and it was affecting the upcoming freshmen, even though I wanted to prevent that from happening so badly.

How did you feel watching yourselves in the film? Was it painful to watch some of the scenes?

Jeon: I actually enjoyed watching it. I’m not degrading the pain that we all went through, but since everything turned out so well, I think the tragedy of it transformed into comedy.

Lee: I think everything that I did was possible because I was a youthful student. I was a 25-year-old that could freely express what I felt was right and wrong. If I had to do it now, at 34, I would have refused to do it.

But [back then] I was a student, I wasn’t depending on anyone else and I didn’t have to hide or restrain myself. I think that is the true portrait of a student.

Did you plan on making a documentary from the start?

Park: No, and I don’t think I would have stepped into the role if I knew that I would be doing this for 10 years (laughs). But making the film and putting it out in the world is like closure to me. I had thought about why I couldn’t let go of the footage that I had filmed after everything became normal again. The film title is “Graduation” and in that sense that we are finally putting it all behind us and moving on with our lives.

If anything else, the footage was a huge help to me and the others who were going through the many lawsuits [brought upon us by Kim]. So that fulfilled its main purpose, which was to protect my friends.

What did you gain from making the film and fighting for justice?

Park: I think I can speak for everyone who fought for 10 years and say that we matured in a way that was different from the typical student acquiring knowledge in a classroom. After we had gone through everything that we did, we [no longer] judge anyone’s worth by their social status or wealth. Because the other former president was really such a dreadful person, even with all of his wealth and his position. So we learned the hard way that regardless of one’s social background, it’s so much more important to see what the person has to say or how they act.

Moreover, what we should know about private regional universities like Sangji is that there still isn’t a proper structure that provides checks and balances on the power that the board holds over the school. That’s how Kim became president and after he became president, nothing that he did was illegal [on the surface]. He only used the school budget for purposes that were not educational, but there is no evidence that he directly took the money for his own gain.

The students fought because he was ruling over the school like a king, suppressing the students, not providing the right learning environment and dismissing staff members and the professors who were on the students’ side. I know that media outlets often phrase our acts as toppling corruption, but it’s more of the democratization of a private educational institute.

*Although the school finally seems to be back on its feet, it has a long road ahead, as the school was given a D- in the university assessment conducted by the Ministry of Education in 2016 when Kim was the president. Improving that grade is a task for current president Chung Dae-hwa and rest of the school’s staff. Chung was the leader of a group of professors who opposed Kim and supported the students.

1974
Kim Moon-gi becomes chairman of the board and changes the name of Wonju University to Sangji University.

1992-1993
Students stage a sit-in protest that lasts 331 days to punish the chairman Kim Moon-gi for his corruption and to reinstate professors dismissed wrongfully.

March 1993
Kim Moon-gi is arrested under suspicions of allowing illegal admissions and other allegations of corruption. The Ministry of Education dispatches a substitute chairman of board.

2010
The Private School Dispute Resolution Committee selects four of Kim’s aides to be members of the board.

March 2014
Kim Gil-nam, the second son of Kim, becomes the new chairman of the board.

March 2015
The Ministry of Education demands the board dismiss Kim Moon-gi.

July 2015
The board dismisses Kim Moon-gi.

August 2016
The Ministry of Education conducts a special inspection and audit into Sangji University.