‘Every device will be connected’

‘Every device will be connected’ 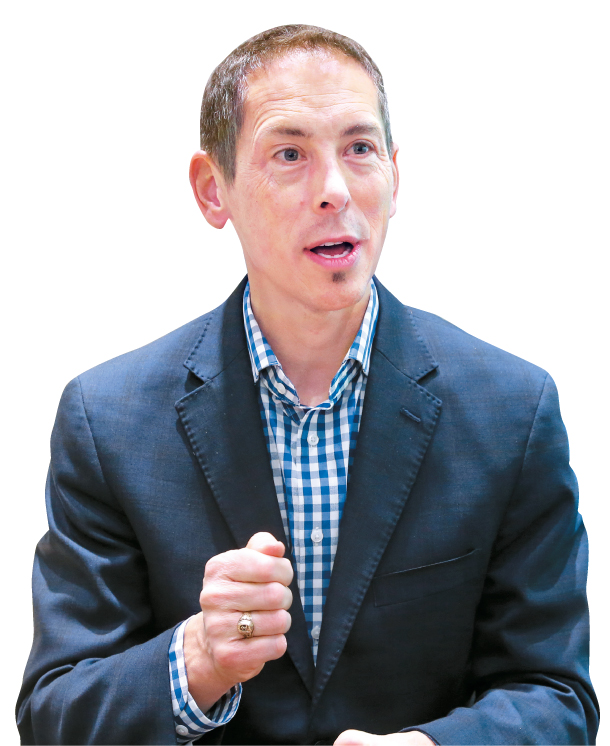 As the auto sector braces for a massive industry overhaul with the introduction of self-driving cars and the rise of electric vehicles (EV), traditional automakers and complete outsiders such as tech companies have laid out their own visions to redefine exactly what a car is.

The Korea JoongAng Daily met with Kurt Hoppe, product management director at Google’s Android Automotive, to discuss his take on the future of cars on Oct. 29 during the Smart Mobility Conference Sejong 2019 in Sejong hosted by the Ministry of Land, Infrastructure and Transport.

“More than 85 percent of new cars are expected to be connected in the next five years,” said Hoppe, explaining that development in connected cars could outpace other new mobility sectors as broader integration between devices, including cars, becomes increasingly prevalent.

“I think every device will be connected. This has been a trend for 20 years.”

The expert, who sees cars as just another “surface” or “device” to become integrated into a wider network, highlighted the necessity of safety as a reason for the vehicles to take off.

“It takes a lot of time [to build] infrastructure,” he said, explaining that monitoring through public infrastructure to ensure safety would be inefficient. “For example, if you want a pole with a special kind of camera on it or sensor, this could take a few years to install, and the cost is significant.”

Cars that collect and exchange data will be a simpler solution.

“If you have 10,000 connected cars and use this to see problems in terms of safety and public accidents, it can happen much faster,” he explained. “You can also retrofit vehicles with AI [artificial intelligence] dash cams on cars, taxis, delivery vans, buses and it could be used today as opposed to three years later.”

While drivers may be familiar with Android Auto or Apple Car Play vehicle infotainment systems, they are limited in functionality as they simply connect smartphones to in-car displays.

Android Automotive would embed the operating system in the car.

Google unveiled the system earlier this year and has partnered with Volvo’s luxury EV brand Polestar to launch next year. It will also be available on the electric version of Volvo’s XC40.

The tech company is also working with General Motors and the Nissan-Renault-Mitsubishi Alliance.

“Google Maps, Google Assistant, a digital assistant technology that is hands-free, and the Play Store, which has access to thousands of applications, would now be available [on cars] through the embedded system,” said Hoppe, who worked on connected technology at LG Electronics and General Motors prior to his current role at Google.

“We have a major developer community that can work with automotive manufacturers to deliver onto another surface,” Hoppe said, referring to cars as just another platform for Android, just like televisions, set-top boxes and smart TV sticks.

The role of media in cars will only grow, leading to the importance of an embedded system, according to Hoppe.

“Most automotive manufacturers are taking their center screen and making them bigger, and they’re putting a digital cluster and a heads-up display so there are more screens in vehicles,” he said. “We would power all of these with the Android Automotive system.”

Hoppe said other technology such as autonomous cars, EVs and shared mobility would see limited growth compared to connected cars, explaining that EVs will take 20 percent of vehicle sales in the United States by 2025, while 10 percent of cars sold in the next 10 years will be shared.

He was unsure about the popular adoption of self-driving cars in the near future, considering the prices involved.

“The question is: Will personal vehicles have autonomous capabilities?,” he said. “Some of the sensors are quite expensive today such as lidar, so it will be robo-taxis that will be using autonomous vehicles.”

“Often, depending on the way governments are set up, there may be conflicting interests, if they are not collaborating, this could cause slowdowns,” said the expert, explaining that cooperation between different levels of government will be important to overcome the barrier.

“I think citizens are also often slower to change their habits than technology people would like,” he added.

“For example, smart home took decades,” explained Hoppe. “It was only until smart speakers and voice assistants made it so simple that now it can suddenly accelerate.”

“After 25 years of very slow progress, smart homes are now in tens of millions of homes.”

It will largely be up to companies to overcome that barrier.

“Consumers were not adopting because it was new,” he said. “Educating consumers with the correct kind of marketing, awareness and familiarization and exposure [is necessary].”