Left: The Mercedes-Benz EQC 400 4MATIC is being charged at a Mercedes-Benz exclusive premium electric vehicle charging station inside the parking lot of Lotte World Tower in Songpa District, southern Seoul. The Mercedes-Benz-branded charging station is offered only for customers with the “Mercedes me Charge Membership Card.” Right: The new EQC, priced at 105 million won (＄90,000), is driven down a road in Pocheon, Gyeonggi, during a test drive event held last month. [MERCEDES-BENZ KOREA]

POCHEON, Gyeonggi - Around six months ago, Mercedes-Benz started producing its answer to the Tesla. Late last month, the model finally landed in Korea.

The Korean unit of the German automaker invited reporters to test the EQC and to let them know that Mercedes-Benz is not just focused on staying competitive in fossil-fuel vehicles.

The Korea JoongAng Daily did try the EQC on the road during a global media event held in Oslo, and the car was impressive. 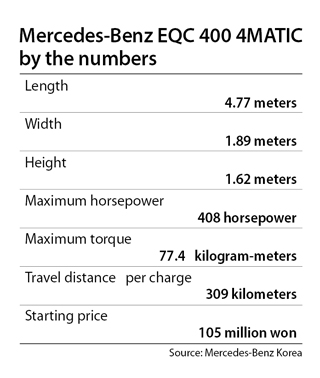 But to state the obvious, Norway isn’t Korea, and when in Korea and in a Korean state of mind, something was different. Something was off. It didn’t seem as if the car was right for Korean drivers, who tend to like high-tech features and don’t want the inconvenience of having to hunt down a charging station every few hours.

On a 60-kilometer (37.3-mile) drive from Seoul to Pocheon, Gyeonggi, the EQC screamed Mercedes, traveling down the highway like a hot knife through butter. Making turns, shifting lanes and accelerating above 150 kilometers per hour (93 miles per hour) cost me virtually nothing, and the only sound of the whole ride was my smartphone’s ugly ringtone.

There were the usual EV issues.

The car lacked the auditory feedback one might expect zipping so fast down the road and around the town. Like all cars powered with batteries, this model failed to produce a satisfying vroom. It also denied me that thrill of racing past lesser vehicles, even in sports mode.

After all that fast and furious driving, arriving at Pocheon before any other reporter, it became clear that nobody should drive the EQC like me, as the power level was far too close to zero when I arrived.

Despite its power and performance, at the end of the day, the car seems best made for puttering around town.

After returning to Seoul, traveling a total of 120 kilometers, the dashboard showed that the car had only 26 percent left in its battery, which equates to just 85.2 kilometers of driving left.

Mercedes-Benz Korea said the vehicle can travel up to 309 kilometers per charge; the number is significantly lower than the distance per charge promised by EVs from other automakers, like Hyundai Motor, General Motors and Tesla.

A Telsa can go 450 kilometers on a charge.

With me at the wheel, it was like an old smartphone after watching a high-definition movie.

The car comes with the “Mercedes me App,” which allows drivers to utilize their smartphone as a smart key for their Mercedes. For the media event, Mercedes-Benz Korea offered temporary login credentials to this reporter.

From miles away, you can unlock the car, control the temperature, look up trip data and check tire pressure.

It also allows me to find the nearest EV charging stations and even let me call the customer support team if needed.

Yet the app itself was pretty slow and counterintuitive. While presetting temperatures and finding the nearest charging stations seemed cool, locking or unlocking car doors took more than five seconds every time. I missed using regular keys.

The good news is that the frustration ends at the car door. With the Mercedes-Benz User Experience (MBUX) infotainment system, the car provides high-speed touchscreen displays and voice-operated controls, which understood virtually everything I ordered it to do during the test drive, in English and Korean.

The navigation was a little slow in following the EQC’s moves, but remember that the car supports Android Auto and Apple CarPlay, so plug in your smartphones if needed.

The EQC is not so Mercedes-like in terms of its exterior design. The transition to electric seems to have sucked the grandeur normally associated with the brand right out of the car. Blue-striped LED head lamps and smoother lines across the sides and top provide a futuristic look, but too futuristic for this reporter living in 2019.

The German automaker did better in designing the EQC’s interior. Quilted seats and the tech-heavy and bluish wide-screen cockpit of two 10.25-inch displays made me feel I was in a very comfortable fighter jet from a sci-fi movie.

The EQC seems like a solid first step for Mercedes-Benz moving into the environment-friendly vehicle competition even though there’s room for improvement. The on-the-road performance is definitely a win, but with a look and feel a bit too futuristic for its own good, coupled with insufficient juice for the average hotshot and an underwhelming Mercedes me service, some might think for a second before spending 105 million won ($90,000) for the ride.