The Terminator is back... and topping box offices around the globe

The Terminator is back... and topping box offices around the globe 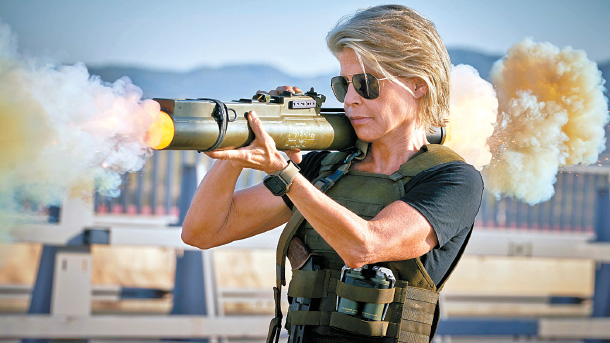 “Terminator: Dark Fate” topped both the local and North American box offices, although not with such a bang as many had hoped for. [20TH CENTURY FOX]

“Terminator: Dark Fate” was victorious landing itself at the No. 1 spot at the local box office as well as with high praise from moviegoers for its female lead.

The Hollywood film gathered 938,000 moviegoers at 1,315 screens on its first weekend. After drawing much excitement from original Terminator fans due the return of the original franchise creator James Cameron as a producer and fan-favorite actors Linda Hamilton and Arnold Schwarzenegger, the film seemed to have lived up to its anticipation with its action-filled, intense plot.

After Judgement Day, everything seems to have returned to normal until the year 2020, when a human cyborg named Grace and a Rev-9 terminator arrive from the future to find Daniella “Dani” Ramos. Their objectives, however, differ to the extreme.

When Grace and Dani are cornered, Sarah Connor appears to fight off the enhanced terminator, and the three escape the building. In a safe place, Sarah tells Grace and Dani that she has been receiving messages from an unknown person to save Dani, who she believes will become the mother of the new Resistance leader to defeat Legion, an evil artificial intelligence with the purpose of destroying humanity in the alternate future. But to secure her safety, the trio must destroy Rev-9, which seeks to destroy until it fulfills its purpose. 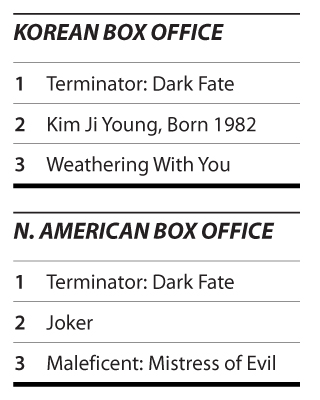 The disputed “Kim Ji Young, Born 1982” was seen by 682,000 people in 1,272 screens. Although the film failed to retain its top spot, it reached its break-even point of 1.6 million ticket sales in eight days since its release and had accumulated almost 2.5 million admissions in 12 days.

Japanese animated romantic fantasy film “Weathering With You” took the third spot, selling 206,000 tickets in 621 screens. The director behind highly successful animated film “Your Name” (2016), Makato Shinkai this time paints a gloomy Tokyo where people worry about the nonstop rain that engulfs the city. Meanwhile, the protagonist of the story Hodaka - a high school student who runs away from his home to live in the city - cross paths with Hina, a legendary weather maiden who can control the weather.

At the press conference held in southern Seoul last week, the director said that he hopes to convey messages about the seriousness of climate change and the responsibility adults should take.

“Joker,” after reigning in the top ranks of the local box office for a month, fell to the fifth place, drawing 91,000 moviegoers to 529 screens.

Despite also taking the top spot in the North American box office, Terminator wasn’t as popular as it was expected to be.

Despite generally favorable reviews, the movie opened well below expectations at the box office. Studios on Sunday estimate that “Dark Fate’’ earned only $29 million from over 4,000 North American locations. The film from Paramount Pictures cost a reported $185 million to produce. It was enough to win the top spot at the box office, but it’s a weak victory for the franchise. Although “Dark Fate,’’ which was directed by Tim Miller of “Deadpool,” received much better reviews (currently at 69 percent on Rotten Tomatoes) and was praised for being a return to form to Cameron’s original films, it opened just slightly ahead of 2015’s roundly-derided “Terminator: Genisys.’’

“These big brands carry with them huge expectations, often unrealistic expectations,’’ said Comscore senior media analyst Paul Dergarabedian. “It wasn’t for lack of enthusiasm for the stars and filmmakers.’’

Second place went to “Joker,’’ which added $13.9 million, bringing its global earnings to $934 million in just five weeks in theaters. “Maleficent: Mistress of Evil’’ landed in third place in its third weekend with an additional $12.2 million. The Angelina Jolie-led sequel has grossed $84.3 million in North America.

One of the highest-profile new films of the weekend, Martin Scorsese’s “The Irishman,’’ does not have any box-office numbers to report, however, because Netflix declines to provide numbers for its releases. Starring Robert De Niro, Al Pacino and Joe Pesci, the film which opened in limited release before hitting Netflix on Nov. 27 is expected to be a major Oscars contender.

But it might be in for some tough competition as other smaller release films with awards buzz continue to perform well. “Parasite’’ took in $2.6 million in its fifth weekend, “Jojo Rabbit,’’ in its third weekend, added $2.4 million from 256 screens and “The Lighthouse,” also in weekend three, grossed $2 million from 978 locations.