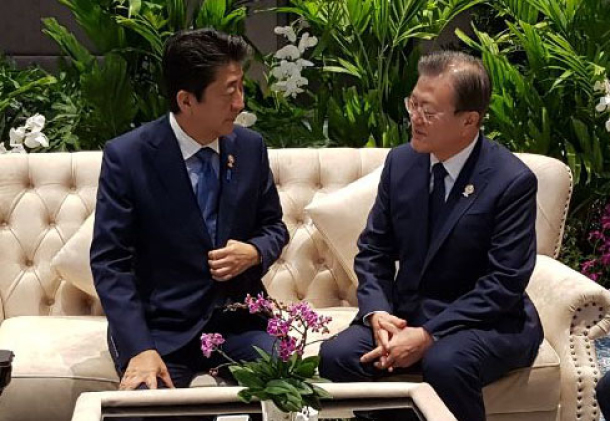 President Moon Jae-in and Japanese Prime Minister Shinzo Abe spoke for the first time in 13 months in an impromptu encounter in Bangkok.

On the sidelines of Asean summit events in Bangkok, Moon had an 11-minute meeting with Abe, Ko Min-jung, presidential spokeswoman, said Monday. Moon and Abe sat down accompanied by only their interpreters, according to Ko.

“Moon and Abe had talks in a very friendly and serious mood,” she said. “The two leaders agreed that Korea-Japan relations are important. They reaffirmed the principles that outstanding bilateral issues must be resolved through dialogue.”

According to Ko, the two leaders expressed hopes that official consultations between the foreign ministries of Seoul and Tokyo would produce ways to improve ties.

“Moon also proposed to have a higher-level discussion if necessary,” Ko said, hinting that the Korean leader extended yet another offer to Abe for a bilateral summit. Moon reportedly proposed a summit in a letter to Abe delivered by his prime minister last month.

“Abe replied that efforts should be put forth to find a resolution through all possible ways,” Ko said.

According to the Blue House, Moon initiated the chat before an Asean Plus Three (Korea, Japan and China) summit started.

“Moon had a series of dialogues with leaders of Indonesia, Vietnam, Cambodia, Laos and Myanmar ahead of the summit,” Ko said. “Abe arrived later, and Moon approached and ushered him to a nearby seat and had exclusive talks.”

According to sources from the Blue House, there was no prior arrangement for the meeting. Moon made the impromptu offer to talk with Abe, the sources said.

Ahead of Moon’s departure for Thailand on Sunday, expectations for contact between Moon and Abe were low, and no tangible sign of a thaw was seen in the icy mood between Seoul and Tokyo. Presidential aides predicted the two leaders would run into each other at the forum, but a substantial dialogue was unlikely.

The 11-minute talk was the first bilateral contact between Moon and Abe in four months since an uneventful eight-second handshake in Osaka, Japan, during the Group of 20 summit in June.

Since Moon took office in May 2017, he has had five summits with Abe. The last was on the sidelines of a United Nations General Assembly in New York City in September 2018.

The diplomatic chill worsened after the Supreme Court of Korea ruled last year that Japanese companies must pay compensation to individual Korean victims of wartime forced labor. The dispute eventually spilled over to a tit-for-tat trade spat between Seoul and Tokyo and led to the Moon administration’s decision to withdraw from a military intelligence-sharing pact with Japan.

The chat between Moon and Abe came at a sensitive time, as the General Security of Military Information Agreement between Korea and Japan will formally end on Nov. 23. The Asean forum this week was effectively the one and only diplomatic chance for the two leaders to meet before the expiration date, since the APEC summit in Chile on Nov. 16 and 17 was canceled.

Over the past weeks, Moon has extended an olive branch to Abe. He sent a letter to Abe through Prime Minister Lee Nak-yon, when Lee visited Japan to attend the enthronement ceremony last month, and proposed a summit.

Abe sent a message to Moon last month to express condolences after the death of the Korean leader’s mother.

While the Blue House’s briefing was upbeat about the latest meeting, the Japanese Foreign Ministry said Monday in a press release that Abe clearly conveyed Tokyo’s fundamental position on outstanding issues to Moon.

Japanese media including NHK and the Nihon Keizai Shimbun reported Monday afternoon that Abe merely reiterated Japan’s earlier stance that the forced laborer issue had been settled through the 1965 bilateral claims settlement agreement.

Meanwhile, a top politician in Korea said he has crafted a bill to satisfy both the forced labor victims and the Korean public, Kyodo News Agency reported Monday.

According to the report, National Assembly Speaker Moon Hee-sang said donations will be raised from Japanese and Korean firms as well as from individuals from both countries who are willing to create a fund to compensate former wartime laborers. He told reporters in Tokyo that the money will not be forcibly collected but refused to elaborate.

Speaker Moon was visiting Japan for a parliament leaders’ summit for the G-20 countries. Ahead of his visit, he had an interview with the Asahi Shimbun last week.

In the interview, published on Sunday, the top legislator said he will decide later whether he will actually submit it to the National Assembly for a vote or not, after he sees the reactions of Japanese politicians and officials.

Since then, Korean politicians have explored various options to resolve the dispute. Speaker Moon, according to the Asahi, said the Korean government has little room to maneuver to create a plan that will satisfy both the victims and the Korean public, because it must respect the Supreme Court’s ruling. “A politician, however, has more room to move,” he said, explaining why he decided to draft the bill.