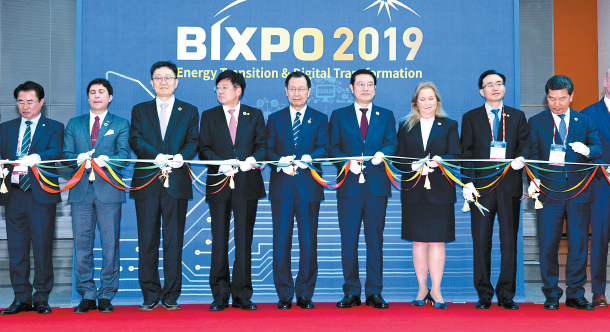 GWANGJU - Korea Electric Power (Kepco) CEO Kim Jong-kap predicts a “hyper-connected society” in the near future and is calling on the energy industry to brace for a “mega-shift.”

Kim cited the accelerating development of new technologies, such as big data, artificial intelligence and the Internet of Things, for that change as he kicked off the Bitgaram International Exposition of Electric Power Technology (Bixpo) at the Kimdaejung Convention Center in Gwangju on Wednesday.

Under a “Digital Platform” theme, this year’s Bixpo hosts 299 companies, including Siemens, Hyundai Motor and SK Telecom, through Friday. They are showcasing the latest energy-related technologies, from maintenance drones for transmission towers to hydrogen vehicle infrastructure

In order to realize the hyper-connected society that companies and governments alike seek to accomplish, Korea needs to invest in attracting more talent, according to experts at Bixpo.

“Whatever you do, having people is the most important task,” said Cha Sang-kyun, a data science professor at Seoul National University, citing London-based artificial intelligence company DeepMind, which is now under Google.

“DeepMind succeeded strategically because it grew its size by tenfold over three and a half years.”

Cha believes that Korea could be a key player in developing new technologies and even become a hub for AI in Asia if it starts to take its commitment more seriously.

“We could accomplish this if we spend 200 to 300 billion won [$173 million to $259 million] led by the private sector,” said the professor, explaining that government-led efforts would not achieve much progress as bold decisions and risks are needed.

Cha added that Korea should also work with other players to compete with the United States and China.

“This is a game of scale. We lack the manpower and resources, so we need to cooperate with countries that have similar problems.”

Cha, who has an advisory role at Kepco, called on the utility company to take a more active role abroad.

“Kepco’s electric infrastructure is globally competitive,” said the professor. “By building a digital solution, it could even enter Silicon Valley as the U.S. power system is falling behind.”

Bixpo, which started in 2015, is the largest energy conference in the country and is in its fifth year. Kepco expects over 80,000 participants at this year’s event.

Siemens is exhibiting smart energy management systems that uses the cloud to collect and analyze data.

“With the highest urbanization rate among [Organisation for Economic Cooperation and Development] countries, at 92 percent, Korea is facing a consistent increase in the growth potential of smart infrastructure-related markets, including smart cities,” said Chung Ha-joong, head of smart infrastructure at Siemens Korea.

Hyundai Glovis and Kepco signed a memorandum of understanding (MoU) at the forum to work together to establish charging infrastructure for commercial electric vehicles.

The charging stations are expected to be showcased from next year, when such vehicles enter the market.

At last year’s Bixpo, 21 MoUs were signed that were worth a total of 225.5 billion won.

The forum is also hosting a number of international conferences, with the participation of the World Bank and the Korean Institute of Electrical Engineers, at which the newest trends in the energy industry will be discussed.