Hyundai Motor wants your car to buy its own gas

Hyundai Motor wants your car to buy its own gas 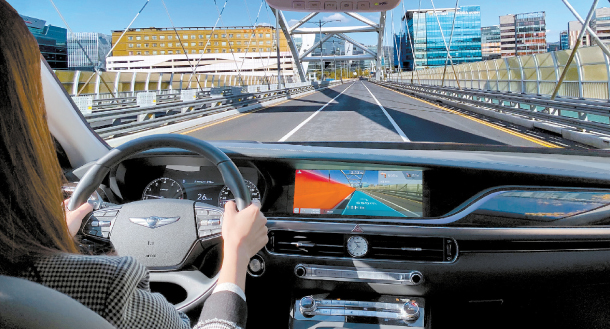 A computer-generated image of the augmented reality navigation system to be installed in future Genesis cars. [HYUNDAI MOTOR GROUP]

Hyundai Motor Group said Thursday that it completed development of an augmented reality (AR)-based navigation system and smart payment system that allows drivers to pay for things from the comfort of their car without cash or card.

These features will initially be introduced in cars released under the group’s luxe brand Genesis, Hyundai said. The car brand is expected to launch its first sport utility vehicle, the GV80, later this month.

The AR navigation system helps drivers find their way by superimposing directions on live footage of the actual road filmed through cameras mounted on the car.

“The AR map is expected to be a more intuitive guide for drivers, especially when they need to enter narrow alleyways, junctions and exits at highways,” the carmaker said in a statement.

The map will also alert drivers when they drift out of their lane or are likely to collide with nearby cars.

The smart payment system, according to Hyundai, will allow drivers to pay at gas stations or parking lots with just a touch of the infotainment screen inside the car.

To use the service, drivers need a smartphone app with their card information registered. When the car enters a gas station or parking lots affiliated with the app, a message will pop up on the in-car display so users can pay with just a few touches.

The auto group said it hopes to open the era of car commerce by adopting the smart in-car payment system for the first time in Korea.

The group said it will expand its payment service by partnering with fast food franchises and cafe chains in the future.