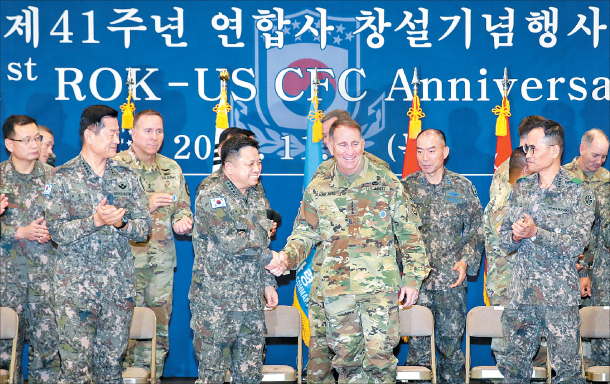 Alarm has started to spread in Seoul over reported demands by the United States that Korea contribute to the upkeep of U.S. military forces beyond the Korean Peninsula.

According to Rep. Yoon Sang-hyun, chairman of the National Assembly’s Foreign Affairs and Unification Committee on Thursday, Washington’s chief negotiator in negotiations with Seoul over the Special Measures Agreement (SMA), James DeHart, told Korean lawmakers and government officials in a meeting that Korea should pay approximately $4.7 billion in alliance upkeep costs - around five times the amount it currently pays to keep U.S. forces stationed on its soil.

Yoon told a local broadcaster that this amount includes labor and logistics costs for the U.S. Forces Korea (USFK) - which Seoul is already paying - but also maintenance and deployment costs for U.S. strategic assets on Korean soil and at U.S. military bases abroad, possibly in Guam, Hawaii and around the Indian Ocean.

Other expenses demanded from Korea include the costs of conducting combined military exercises and upkeep for civilian attaches to the USFK.

Yoon said he told DeHart that Korea’s legislature would not be able to accept such massive increases to the country’s alliance costs apart from the kind of expenses it is already paying.

Even if the two governments reach a settlement on next year’s SMA, the arrangement would require ratification by Korea’s National Assembly.

Under the 10th SMA, which expires in December, Seoul agreed to pay nearly 1.04 trillion won ($888.6 million) this year, which was 8.2 percent more than what Korea spent the previous year for the stationing of 28,500 U.S. troops.

After arriving in Korea on Monday, an informal visit that reportedly took Korea’s Foreign Ministry by surprise, DeHart appeared to hint at a major hike in Seoul’s military burden when he said Korea, which was once a country that received aid from the United States, was now a major contributor to the United States’ global military presence.

Korean government sources have been hinting at a change in Washington’s cost-sharing calculus, as in August, when a diplomatic source said Washington could charge Korea for protecting the “freedom of navigation” in areas like the Strait of Hormuz, the Strait of Malacca and the South China Sea - shipping lanes that Korea depends on to import oil from the Middle East.

Analysts say the United States may be using the burden-sharing arrangement to pull Korea into its Indo-Pacific strategy, ultimately designed to contain an increasingly assertive China.

Some media outlets in Korea even reported that Washington may be weighing a withdrawal or scaling down of its military forces on the peninsula to apply pressure in the cost-sharing negotiations. But Seoul’s Foreign Ministry Wednesday denied that any such suggestions have been made in the second round of working-level talks in Hawaii on Oct. 23 and 24 or throughout the process as a whole.

DeHart was only one of several senior U.S. officials who visited Seoul this week. David Stilwell, the U.S. assistant secretary of state for the Bureau of East Asian and Pacific Affairs, and Gen. Robert Abrams, USFK commander, held separate discussions with Kim Hyun-chong, the second deputy chief of the Blue House National Security Office, on issues including the SMA and an intelligence-sharing pact between Korea and Japan known as the General Security of Military Information Agreement, or Gsomia.

Korean analysts are seeing these visits as pressure by Washington before the third round of SMA negotiations and Gsomia’s expiration, both of which take place later this month. Yet a demand for such a massive hike in Korea’s sharing of defense costs is likely to complicate the SMA talks, and an agreement may not be reached within the year.