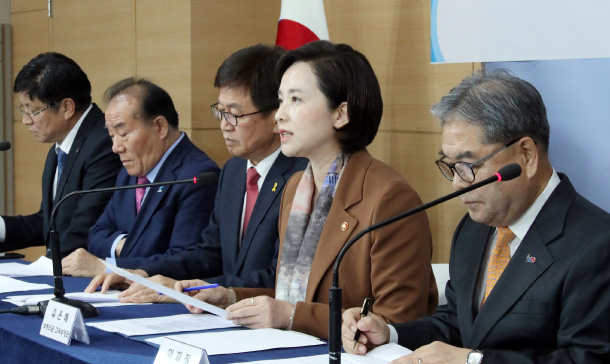 Education Minister Yoo Eun-hae, second from right, announces a government plan to turn three categories of elite high schools into regular schools in 2025 at the government complex in Seoul on Thursday. [YONHAP]

“All of the autonomous private high schools, foreign language high schools and international studies high schools will be turned into regular high schools in March 2025, all at once,” said Education Minister Yoo Eun-hae in a press briefing at the Central Governmental Complex in Seoul on Thursday afternoon.

These schools are more financially independent from the government and are granted more freedom in choosing students, developing their curriculum and how much they can charge in tuition.

The Moon Jae-in government deems these three types of high schools as schools created merely to prepare students for college admissions and as worsening the divide between those who can afford higher-end private education and those who cannot.

“Autonomous private high schools focus their curriculum on only the subjects needed for the college entrance exam,” the Education Ministry said in its statement Thursday.

The ministry said autonomous private high schools spent an annual average of 105 additional hours from 2015 to 2017 on teaching language and literature, mathematics and English, the three mandatory subjects of the College Scholastic Ability Test (CSAT), which is the standardized college entrance exam in Korea.

“We also found evidence that the graduates of foreign language and international studies high schools do not become specialists in these areas and do not select to major in these areas in universities,” the ministry said in its statement. “That makes one wonder if these specialized high schools are fulfilling their purposes.”

“As we recently announced, there seems to be traces of an unequal system in the university acceptance rate among graduates of regular high schools and those of autonomous, foreign language and international studies high schools,” the ministry said.

The ministry studied the admissions records of 2.02 million applicants at 13 universities in Korea, including its top three Seoul National, Yonsei and Korea Universities, and found that in both early and regular admissions, autonomous, foreign language and international studies high schools did better than regular high schools.

“That only leads to more students seeking to attend these specialized high schools and adds to the unequal high school education system,” the ministry said.

The transformation of these 79 schools into regular high schools will mean additional investment from the government to run some of these schools that used to run on private tuition.

The ministry did not announce any details on the budget needed to run these 79 schools as regular high schools in 2025, but said it will support each of the schools that voluntarily decide to become regular high schools before 2025 with 1 billion won ($867,255) over three years.

The ministry also announced that it will spend at least 2.2 trillion won in the next five years on the current regular high schools, to be used on teacher education, strengthening and diversifying curriculum and support for schools located in rural areas.

The ministry in its announcement Thursday said that it will take “appropriate measures” to ensure that these particular private high schools do not add to an unequal educational system.

“We will look into how specialized science high schools, for instance, run their curriculum,” the ministry said. “And will come up with reform measures as needed.”

If the measure goes into effect as planned, it will affect today’s fourth-grade elementary school students who will begin their first semester as freshmen in high school in 2025.

“It is the right of the people to choose and receive the type of education they’d like,” Oh Se-mok, head of an association of autonomous private high schools, told the JoongAng Ilbo. “The current government will not even be in power [in 2025] yet it is trying to shake the foundations of today’s education system in Korea.”