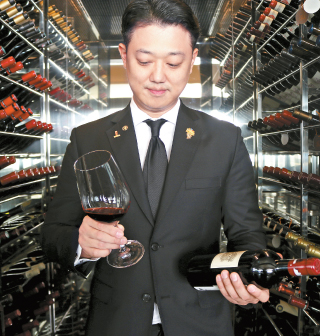 The event, which was organized by the French Ministry of Agriculture and Food and Sopexa Korea on Oct. 28, is one of the largest sommelier competitions in Korea. Bak has had previous success in the annual competition, ranking third in 2017 and second in 2018.

Despite never studying abroad, years of hard work and patience finally led the 33-year-old to success.

Bak said he only slept three hours a day to prepare for the competition.

But even with all his preparation, Bak said he still faced several crises during the 25-minute long competition. The assessment criteria included blind wine-tasting and delivering services that are relevant to specific client orders. The first crisis came when he had to match four glasses of wine to just three bottles.

“No matter how many times I drank them, the wine from a particular two glasses tasted the same to me,” Bak said. “I was confused at the time, but I stuck with my decision and listed those two glasses under one bottle. I was the only one who got the right answer for it.”

The second crisis he faced was the blind wine-tasting. Bak received no points in this test as he couldn’t identify both the vintage and the region where five chosen wines came from.

However, he received high points in other assessments. A client ordered a beer while Bak was serving wine to other eight clients. Despite the unexpected situation, he successfully served the beer within the time limit and eventually ranked first in the competition.

Bak’s passion for wine began in earnest in 2010 when he was hired as a barista at an Italian restaurant named Rucola’s Kitchen in Busan. His boss, who was a former sommelier, recognized Bak’s talent and suggested that he should become a sommelier as he had an outstanding ability at distinguishing wines.

Since that time, Bak began using half of his salary on buying wines and the other half on going to famous restaurants. According to Bak, he visited many well-known restaurants all over the country and paid close attention to their table settings, plating styles and the standard of their service. As he tasted a wide variety of dishes, he’d also keep in mind what wine would pair best with them.

In order to acquire a sommelier license, he had to take some classes, the duration of which varied from three days to three weeks. He took out a loan to pay for the tuition, and after dedicating himself to his studies he earned sommelier licenses from three programs in two years: the French Wine Scholar, the Court of Master Sommeliers and the Wine & Spirit Education Trust.

Bak began gaining recognition after placing second in a competition for the Korea representative for the 2016 International Young Sommelier Competition.

“I can recover from fatigue by looking at my clients in happiness drinking wines that go well with their dishes,” Bak said. “I feel proud of my job that allows me to share happiness with many people.”

Bak will represent Korea in the 5th Asia Best Sommelier Competition in French Wines, which will be held in Shanghai in December.

“I want to share my know-how with the younger generation [who dream of becoming sommeliers] and help my hotel in any way I can,” Bak said. “After this upcoming competition in Shanghai, I will spend less money on buying wine and save some instead. I need to get married, too.”